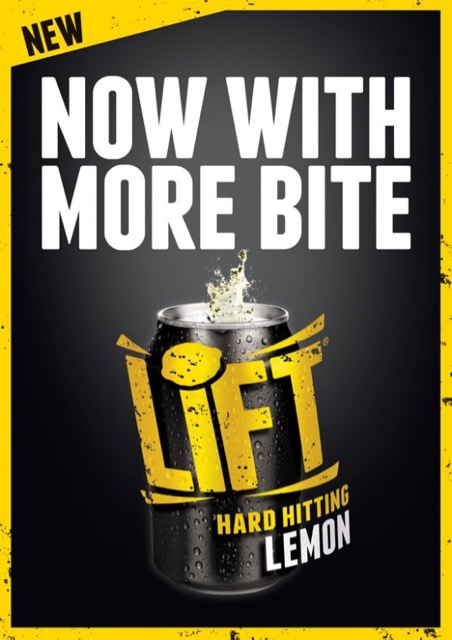 Coca-Cola South Pacific has launched Lift Hard Hitting Lemon, a brand new formulation which is being introduced to shift the perception of the lemon flavour offering in market.

The new product offers Aussies a full bodied lemon drink with sharper taste, more bite and a sugar content now at 8.4g/100ml. Lift Hard Hitting Lemon is tailored specifically for the Australian market and will replace the current Lift drink.

In the last three years, ‘flavour’ offerings have been steadily growing Coca-Cola’s share of the carbonated soft drink category and the brand has identified an avenue to further capitalise on this by driving growth among consumers of Lemon products. This opportunity is borne from consumer insights that demonstrate a disconnect between what is available to Lemon consumers and what they really want.

As a result, Lift Hard Hitting Lemon has been designed to disrupt the market by providing a bolder, better taste. The superior strength and bitterness of the drink is intended to appeal primarily to males aged 35 and above, with the overarching campaign encouraging consumers to ‘ditch the soft stuff’ and opt for Lift Hard Hitting Lemon.

To encourage trial and raise awareness, the launch will be supported by a fully integrated multi-million dollar marketing campaign that includes multi-channel executions across social media, digital platforms, out-of-home and in-store retail activations.

In addition, Coca-Cola has partnered with the AFL and Triple M as part of a strategy to connect with sports fans and reinforce the product’s Hard Hitting proposition. Sampling activity will also take place at a number of major sporting stadiums across the country, including the MCG, SCG and GABBA, as well as at the AFL Grand Final live site, to put the product into the hands of sports fans.

Says Ramona Spiteri, brand manager, Lift Hard Hitting Lemon: “The launch of Lift Hard Hitting Lemon provides a distinct opportunity to grow the soft drink category in Australia. We have conducted research into consumer tastes and attitudes and we’re confident that we have formulated a product that will drive wider appeal to Lemon consumers and beyond.

“We’re running a marketing campaign to support the launch with the aim of reaching and engaging our target audience in the most meaningful and impactful ways.”