M&C Saatchi celebrates 25 years of Tom McFarlane: has been responsible for some of the agency’s biggest clients and most famous work 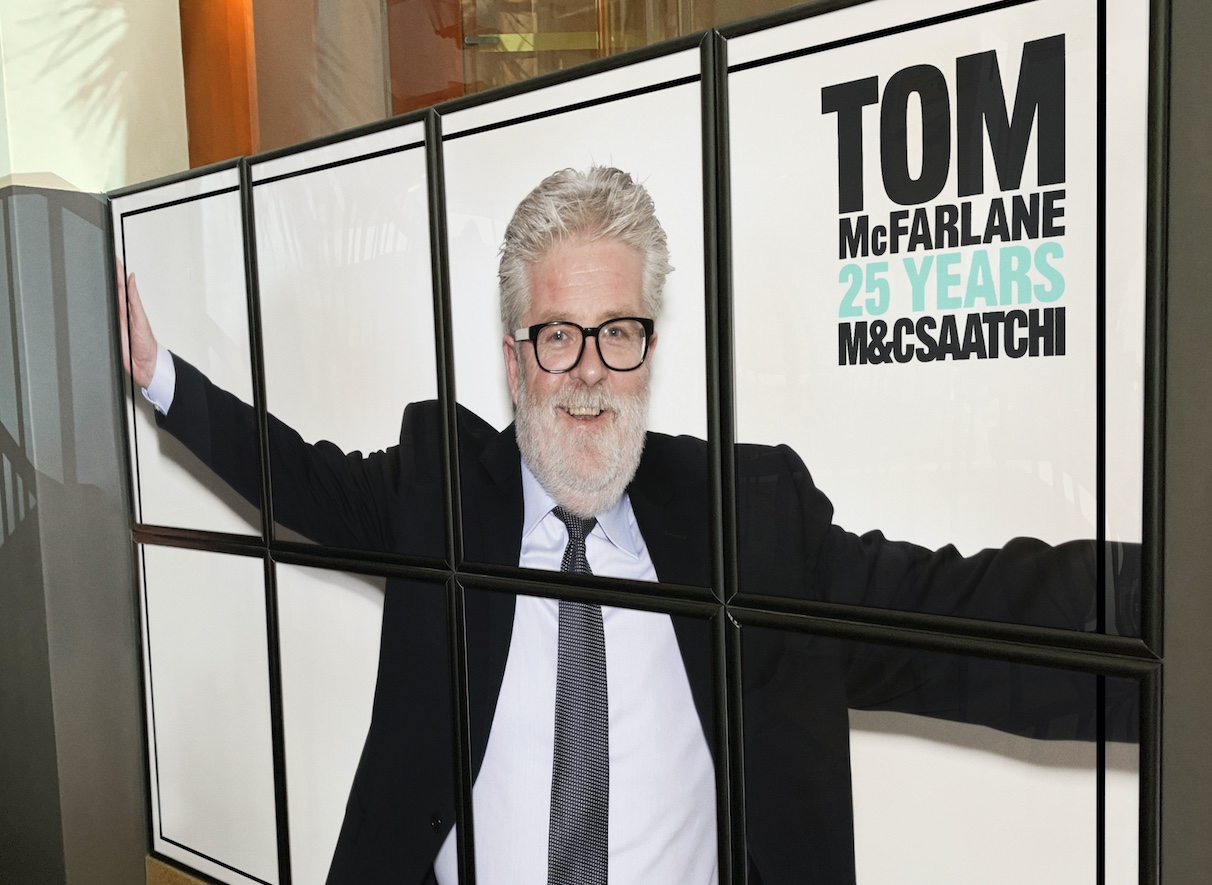 CB Exclusive – Last week M&C Saatchi celebrated a quarter century of one of Australian advertising’s most influential and effective creative leaders Tom McFarlane. His contribution to M&C Saatchi cannot be overstated; he created the brand in the Australian market and has been responsible for what remains the agency’s biggest clients and most famous work.

His storied career began in Melbourne as a despatch boy. Studies at RMIT and stints at four agencies followed before he headed to London to further hone his craft. In his early thirties he found himself back in Australia as executive creative director of JWT Melbourne, followed by several years in the same role at DDB. Fast-forward a few fast-paced years, and McFarlane joined former colleague and account man Tom Dery at M&C Saatchi’s first international office as its founding creative.

McFarlane’s approach has always been big ideas that will genuinely help grow clients’ businesses. His work has cut through the age of media disruption with longstanding brand platforms such as 100% Pure New Zealand, NRMADE better, CAN for Commbank and, globally, the Flying Reimagined platform for Etihad. His portfolio contains some of Australia’s most iconic ads.

His contribution to Woolworths is perhaps most noteworthy. It’s common knowledge that in 2015 McFarlane was considering leaving M&C Saatchi. Instead he was instrumental in winning Woolworths back after a four year absence, having previously held the account in the decade from 2002-2012. He partnered with Woolworths to create the Greenhouse model in which over the past 5 years has produced work that has helped shape the fortunes of what is now Australia’s most trusted and valuable brand.

Says Andrew Hicks, chief marketing officer at Woolworths: “Tom has been a part of the Woolworths team for many years and through his creative prowess and empathy for the customer has been instrumental to the growth of the Woolworths brand. Over that time he has helped create and execute campaigns for Woolworths that have reignited Aussies’ love for the brand, particularly during times of rapid growth and an evolving retail industry. Tom has led the implementation of brand platforms that have become highly recognisable like That’s Why I Pick Woolies, and most recently That’s Today’s Fresh Food People, building trust, connection and advocacy with our customers. We are tremendously grateful for Tom’s commitment and contribution to the Woolworths Brand and the Group more generally. It’s been a privilege to have worked with Tom and have him as part of the Woolworths family.”

McFarlane was inducted to the AWARD Hall of Fame in 2017, rightfully placing him among adland’s greats. AWARD chair of the time, Wilf Sweetland, said on the night: “Tom has had an impact like no other creative leader. His credentials span a decades-long career in agency leadership, his building of M&C Saatchi into a creative powerhouse, his contribution to many of the strongest and longest-running campaigns for so many famous brands, and his legacy in discovering and nurturing the careers of countless industry creatives.”

Says Justin Graham, group CEO, M&C Saatchi AUNZ: “Tom is synonymous with the phenomenal history of M&C Saatchi and I am incredibly grateful not only that I have had the opportunity to work with such an iconic creative leader, I am also, like many others in the industry, grateful for his friendship. He has paved the way so that the Australian business has become one of the market’s most unique and successful operations. I thank him for his continued support, guidance and mentorship over the years.”

McFarlane is known for saying “Confucius probably got it right when he said – choose a job you love and you’ll never have to work a day in your life”. Whilst it may never have felt like work, to commemorate his 25th anniversary he is enjoying his very well-deserved long-service leave. Following that he will officially bid farewell to M&C Saatchi in the first half of 2022, but not to his life-long love of writing.