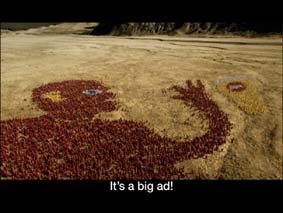 * Onion Communications’ OzWatch survey reveals Carlton Draught’s ‘Big Ad’ to be the nations No.1 choice on the list of Australia’s Top Ten most popular ads.

* Notable big spending brands like Myer, Ford, Holden and Qantas were nowhere to be seen.

As is well documented now, the ad was hugely popular before it even aired on television. It’s a big-budget production, even by television advertising standards, yet it was made for the internet and became a hugely successful viral marketing campaign with over a million hits. Mobile phones via the 3G network were also used.

So why is the commercial so successful?

For a start, it treats the viewer with intelligence and rewards them with a joke in exchange for their attention.

“Like all good comedy it is entertaining and engaging.” said Onion Communications managing partner, Richard Patterson.

“And like all good advertising, it hits a nerve, laughing at other ads and itself, so making it acceptable and entertaining. It’s an intoxicating, attractive combination,”

But does this attention-getting likeability translate into sales?

There is enough global research to suggest in the case of fast moving consumer goods, people who like a commercial ‘a lot’ are more likely to be persuaded by it than people who simply felt neutral. And that the overall reaction to a commercial is the single biggest predictor of its advertising effectiveness.

Likeability is therefore important, but the rules of the game are changing to the point that it may have become the critical component in getting cut through.

“As technology allows consumers to skip ads on interactive TV, advertisers must adapt or die to the changing market,” said Patterson.

“It’s particularly scary when you couple this with recent studies which show today’s younger generation are doing three to four tasks while using the Internet and two or three tasks while watching TV,” he added.

“It stands to reason, if people like your ads you have a better shot at getting attention. Attention–getting devices have been part of advertising creatives’ armoury since time immemorial, and they cover a wide range: noise, bright colour, shock–inducing visuals, music, celebrities, nudity, humour. The potential problem is that it is too easy for the attention–getting device to overshadow the brand and the brand message.

“But this is not the case with the ‘Big Ad’. Onion Communications’ OzWatch also looked at how strong the brand (as opposed to the ad) was in people’s minds. The Carlton United brand scored almost as highly on brand recognition as the commercial itself did on popularity. So doubly well done, Carlton Draught.

“Almost as important as the ads that stood out in the survey are the absentees from the Top Ten. Those that didn’t rate a mention include Qantas, Ford, Holden, Myer, Telstra, Coles, Woolworths, the big banks, Nestle, Mars, P+G and any form of government advertising.

“This leads us to only one conclusion: if these brands agree with the sentiment that likeability is an important factor in cut-through and sales generation, then according to our research, these advertisers are not achieving it.” said Patterson

“I can predict the phone calls from both agencies and clients not on this list, who will be quick to quote both sales figures and pre-testing studies defending their ads. I have one thing to say to them. If they had managed to communicate their existing strategies with an execution with more creative and popular execution, then it stands to reason that their advertising would be more powerful and their sales figures more impressive.” he concluded.