Carlton asks, have you ever had a Dry Dream? 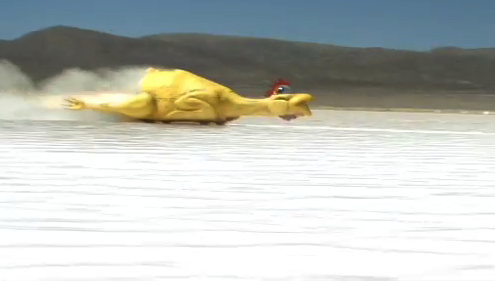 The latest campaign for Carlton Dry, ‘Dry Dreams’ – a Cannes Lion contender for sure – will launch on Sunday night, featuring an attempt at breaking the land speed record for rubber chicken racing, showjumping on an elephant and skeet shooting with a real tank (complete with live ammunition).

Ant Keogh, Creative Director, Clemenger BBDO Melbourne, explains that this campaign is a kindof evolution of last year’s Team Dry work – the work that set thestandard for the fine art of doing nothing: “It’s about those ideas youhave with your mates at two o’clock in the morning; dreams that inspireyou but rarely ever see the light of day – many times for good reason.We thought to ourselves, ‘What if Carlton Dry could help people makethem real?” Keogh said.

The campaign asks blokes, “Have you ever had a Dry Dream?” and challenges them to send in their most hare-brained ideas for the chance at having Carlton Dry help make them a reality.

For the TVCs, the world’s first Rubber Chicken Rocket Car was built in an attempt to break the land speed record (for a rubber chicken). The Guinness Book of Records is currently reviewing this as a new category. A decommissioned Argentinean tank was brought back to life for Skeet Shooting in a Tank – which uses clay discs as big as truck tires. And the pomp

and pageantry of elite equestrian competition is transformed into an extreme sport with an elephant used in the showjumping arena.

Vincent Ruiu, Group Marketing Manager Carlton Brands, says the brand’s phenomenal sales growth is a direct result of Carlton’s respect for their drinkers’ right to do nothing: “For the average 20 year old, life’s about now, not tomorrow, not next week – it’s all about now. We’re tapping into the fun they’re trying to find on a daily, and sometimes hourly, basis,” said Ruiu.

website with online support, two national on-pack promotions and on-premise events Carlton Dry’s stats are impressive. A truly national brand, its strongest markets are WA and NSW. The brand has grown 58% in volume terms and is the fastest growing beer (in percentage terms) in the top 20 beers in Australia (based on value).* In fact, Carlton Dry has doubled in size (volume) in the past 18 months.** The campaign will also include Australia’s leading flavoured beer – Carlton Dry Fusion Lime.