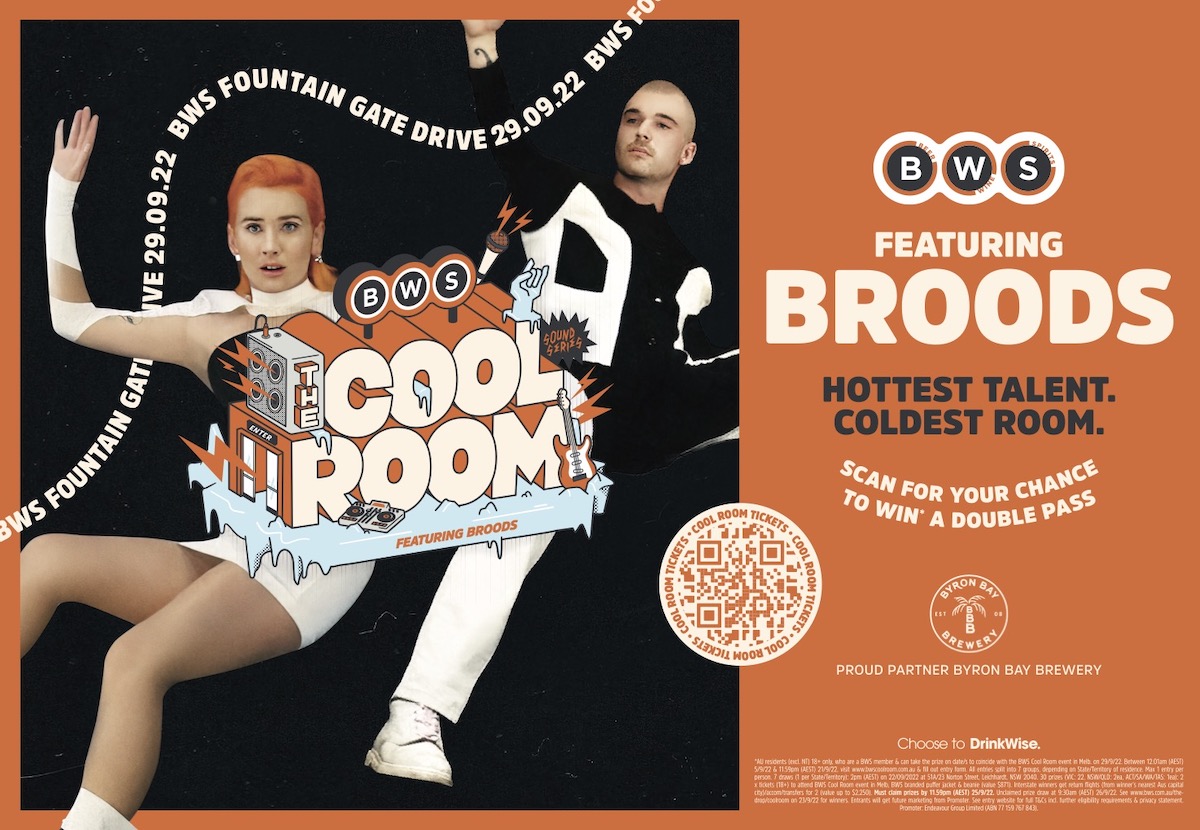 Carat, together with dentsu’s content and partnerships team, has this week launched BWS’s new media platform, The BWS Cool Room via a multi-channel media campaign. The campaign will run for the next 3 months and will include a world first activation supported by audio, online video, social, content and OOH.

Knowing that music is a core passion of young Aussies as well as a critical ingredient to making any experience more enjoyable, Carat and the content and partnerships team at dentsu collaborated with Spotify and Bring, Universal Music’s creative consultancy, to create an unexpected and unforgettable music experience in a BWS Cool Room.

As part of the experience, two of the hottest music artists have been invited to perform a live music set inside two BWS Cool Rooms. Launching in Melbourne on September 29th at BWS Fountain Gate Drive Thru and Sydney on October 27th at BWS Glebe, the experience allows fans to get up close and personal with their favourite musicians and firmly cement BWS as the coolest bottle shop.

To generate hype, Spotify will engage users across their platform with an interactive feature enabling them to get a temperature reading of their music choices. Ranging from hot to chill, a user’s music tastes are paired with a drink recommendation with an extra hot discount to match.

Following their drink recommendation, users will be prompted to enter the Cool Room competition for the chance to win a double pass to either the Melbourne or Sydney Cool Room.

The Cool Room activation and partnership with Spotify and Bring will also be supported by online video with partners such as Twitch, Vevo and YouTube. Meta, along with content partnerships with publishers such as Thrillist and Popsugar.

M&C Saatchi led creative implementation across the integrated campaign, tapping into the cultural zeitgeist to bring music front and centre to the creative platform. The campaign takes BWS’s challenger spirit to the next level, engaging audiences in an unconventional and refreshing way.

With The Zoo Republic leading the promotional strategy, they partnered with Pilgrim Communications and Made In Katana to bring to life an exciting and vibrant microsite for the promotion.

Says Christian Fox, client partner, Carat: “The Cool Room is a media platform which we’ve worked hard to develop and refine and we’re excited to see it come to life. It marks a new era of how we activate media for the BWS brand, and only through true passion for our craft and understanding of the BWS brand can we truly harness the power of media”.

Scott Davidson, BWS managing director promises a world-first music experience for fans: “Whether it’s a night in with friends, a festival or celebration, a trip to the local BWS store and a Spotify playlist on shuffle are the secret ingredients to any great social occasions. BWS wants to give musicians a new platform to perform and for their fans to enjoy,”

“The BWS Cool Room experience will be one like no other, everyone has stepped foot inside a cool room before but this will be an experience they won’t forget, think Tiny Desk concert – but way cooler. The brief for our musicians is to take it up a notch, add an additional instrumental, twist the original, anything that will blow the roof off.”

Says Brendan Donnelly, creative director at M&C Saatchi. “Most bottle shops offer the same bland experience which is ironic seeing they sell the thing you take to a party. The BWS Cool Room sound series changes what a bottle shop can be making a trip to the bottle shop the start of the party.”