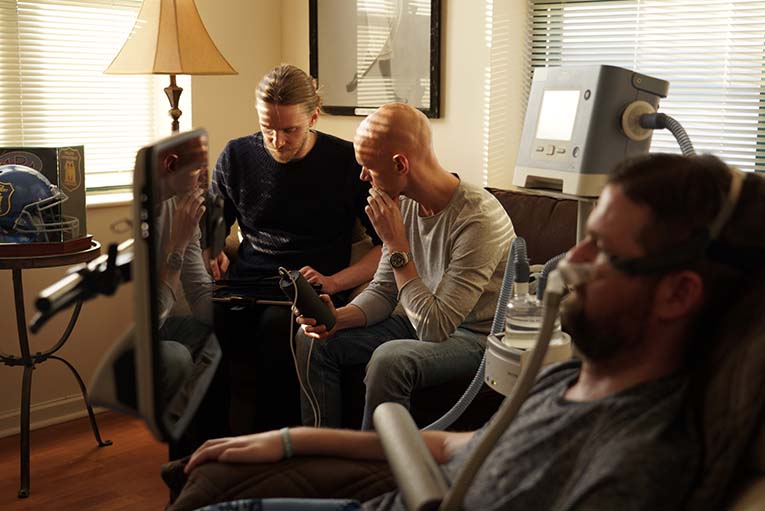 CB Exclusive – BWM Dentsu and its PR arm, Haystac, have launched Project Revoice with the ALS Association in the US and MND Australia.

The groundbreaking initiative introduces a breakthrough in speech technology for people living with ALS (Motor Neuron Disease), enabling those who lose the ability to talk, to continue speaking in their own authentic and personal voice.

To launch the initiative, Project Revoice has given Pat Quinn, co-founder of the ALS Ice Bucket Challenge, his voice back. Pat did not record (or bank) his voice before ALS robbed him of his ability to speak. Using footage from his many Ice Bucket interviews, the team were able to re-build his voice.

In the past, people with ALS could use pre-recorded messages to communicate, but the BWM Dentsu Group worked with Canadian software partner Lyrebird to create a complete voice clone. This allows Pat to speak freely and naturally in his own voice, rather than a ‘machine’ voice, when linked to his eye reader assistive technology. The man who gave ALS a voice now has his own voice back.

“This new breakthrough will change the future of personal communication for people who are diagnosed with ALS from here-on,” says Brian Frederick, Executive Vice President of Communications, ALS Association.

As a collaboration between BWM Dentsu, Haystac, Lyrebird, Finch, Rumble Studios, Space 66 and the ALS Association, it took a year to bring this revolutionary speech synthesis project to life.

Project Revoice is now working to encourage MND and ALS communities around the world to record their voices so they can be digitally recreated in the future using this innovative new voice cloning technology.

Says Pat Quinn, co-founder, ALS Ice Bucket Challenge: “ALS takes and takes and takes. This time I will take something back! For those living with ALS to know that they can still speak freely – in their own voice – even after ALS takes it away, will transform the way people live with this disease.”

Says Asheen Naidu, ECD at BWM Dentsu: “Being able to give Pat his voice back and seeing what that means to him and his family, has been incredibly rewarding. Knowing that this tech is literally going to transform the lives of thousands more, is something we’re all very proud of.”

Project Revoice can be viewed here. For more information on the project and to sign up for updates on Project Revoice – visit projectrevoice.org. To hear how your re-voiced voice might sound, you can check a lower-quality demo version at lyrebird.ai.