Bruce Tweedie: That pivotal creative moment – The birth of the Hotondo Homes jingle 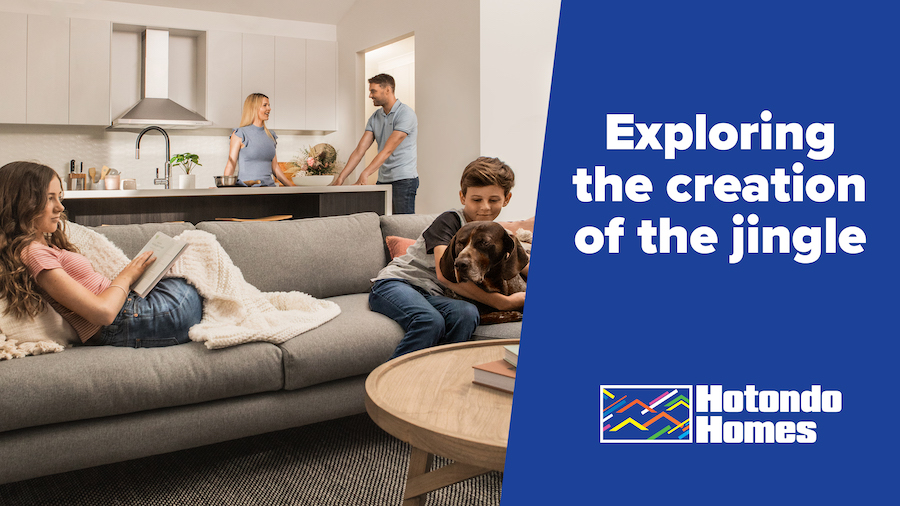 Picture this. A woman named Jodie Flower is driving home from work in 2016. A long commute, just like any other ordinary day, from the headquarters of Hotondo Homes in Moorabbin, Melbourne. She’s a National Marketing Manager working at the coalface, promoting new homes. The construction sector doesn’t account for a major share of the advertising market compared to other industries, but it sits at the heart of Australia’s economy, particularly given our enduring love affair with houses. Jodie’s mission is to get the attention of Australian families looking to build their dream home.

So far, it’s been a challenge to find the right music to capture the essence of the brand, but a need to harness the power of a successful jingle has always stuck in Jodie’s mind. Driven to find something memorable and recognisable, she decides to play some music as a dose of inspiration in the creative process.

An avid radio listener, Jodie only has one CD in her car. As she exits the freeway, she grabs the disc and pops it into her car stereo, entirely unaware of its contents, and a melody soon fills the car.

It turns out the CD is a compilation album called ‘101 Greatest Housework Songs’. She figures that if she listens to enough songs, she might stumble across something that could inspire a jingle for Hotondo Homes. This is the hard grind of marketing – the kernel of an idea, and the hours of toil to try to make it come alive, with no guarantee of success in the end. Sometimes jingles simply don’t gestate, and other times they start well, then flop and disappear without trace.

A few years ago, I spent a lot of time searching for the very first use of a commercially released song, and while it’s hard to be sure, the first one I could find was for the Chrysler De Soto. Interestingly enough it used the same approach as Hotondo Homes – find a song and convert it into a jingle. It must have been a big deal back in 1955, because the ad featured Rock Hudson, and the song was from Cole Porter. They changed the original lyrics from “It’s delightful, it’s delicious, it’s de-lovely” to “It’s delightful, it’s de-lovely, it’s De Soto”. The basic advertising concept endures, while the car is long forgotten.

Now let’s get back to that amazing light bulb moment, when the kernel of an idea transforms into a more concrete manifestation. Like all great creative ideas, one minute it wasn’t there and the next minute it was. Is this the thing that makes us human?

The bouncy synth riff from The J. Geils Band’s “Centrefold” blasts through the car stereo and as it gets to the chorus, Jodie sings along with her Hotondo lyrics, and she absolutely nails it. A few seconds of pure absolute creativity that drives a successful campaign for many years to come. Momentous indeed.

She tries the same approach with a handful of songs on the album, but nothing has quite the same ring to it. She keeps returning to “Centrefold” and when she finally turns the music off, the tune lingers in her head. It’s short, sharp, and most importantly, it’s memorable.

Now I’m a keen student of Damon Stapleton’s blog in Campaign Brief, and the one he wrote about the Beatles doco is particularly relevant here.

He picked apart the creative process that they, and particularly Paul, utilised when they wrote “Get Back”. He identified the key ingredients for a successful creative outcome – pressure and perhaps even a little desperation to find a solution; believing that you will eventually find something; and having the time and space to play around and have fun with it. While I don’t think Jodie would put herself in the same category as the Beatles writing a song for the ages, it is quite striking how all these ingredients were present in her pursuit of an advertising jingle.

Damon’s final ingredient also applies here: getting unequivocal support from your band. When Jodie arrived in the office with her big reveal, her team and management all jumped on board.

But wait … it’s one thing to have a great idea, it’s an altogether different thing to make it work. The history of advertising is littered with brilliant discarded song ideas, mostly because the song couldn’t be licensed for advertising, or was too expensive – which is where we enter the story.

Hotondo Homes’ creative agency at the time approached us to negotiate the deal to use the song, and I was immediately intrigued by the request. I know the song well, partly because it’s a cracker on the dance floor – even now Clare and I hear it regularly when we go to see classic cover bands at pubs. But I also know “Centerfold” from when The J. Geils Band released it in 1981, partly because it is a great pop rock song, but also because the lyrics made me feel a little uncomfortable:

Even back then, before political correctness was a thing, the sentiment just seemed a little controlling and judgemental. And because of that, over the decades that we’ve been licensing songs I always had it in the “too controversial” basket, along with a lot of other songs with similar sentiments (how about Neil Young “A Man Needs A Maid”? or The Police “Every Breath You Take … I’ll be watching you … You belong to me”?). According to Jodie, Hotondo Homes recognised that there was a risk involved, but like the very best brands, they decided to take the risk because they knew the campaign would be worth it.

We obviously did manage to negotiate a deal to license the song for a very reasonable price, and Hotondo Homes never looked back. People have even sent in videos of their kids singing the Hotondo song. With hindsight Jodie can clearly see that a single special creative moment has made a huge difference to the brand, the franchisees and the customers. A few neurons firing in a flash of creativity, creating ripples on the pond that last for years and years.

You can watch the Hotondo Homes TVC here.