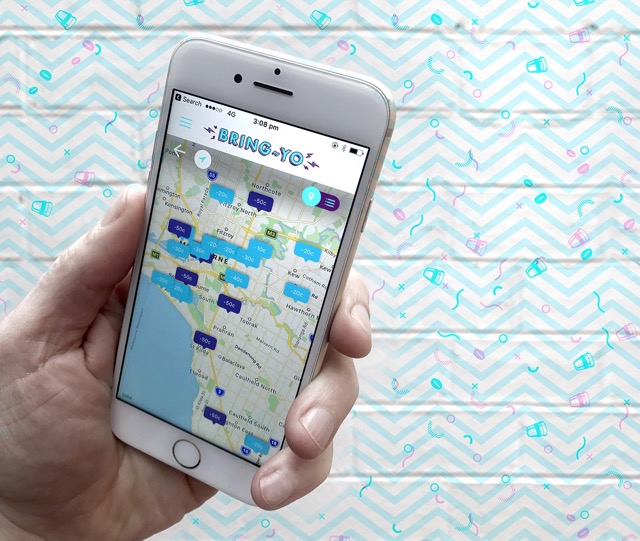 It’s not just the copious amount of sweet lady caffeine keeping the Bring-Yo team up at night. It’s also the 5 billion un-recyclable coffee cups that go to landfill every year. That’s 27 single-use paper cups every second in Australia alone. So the team has built Bring-Yo, a totally free map-based app connecting coffee drinkers to awesome cafes with discounts for reusable cups via V.I. Melbourne.

With Bring-Yo people can use a map search to find and compare cafes near them that offer a discount.

Cafes can list any discount they like and build a profile including description and gallery for users to browse, compare and salivate.

Says Chris Winterton, founder, Bring-Yo: “There’s a massive audience of coffee drinkers for whom the altruistic benefits of being a good human are just not motivating enough to form a habit.

“Bashing them over the head with doom and gloom figures is like throwing uncooked spaghetti against the wall – it just won’t stick. So we created an un-preachy brand built on a fun user experience and most importantly, the motivation to save money.”

Proudly built by agency V.I. in Melbourne, the centre of the modern coffee universe (at least according to Melbournians), it’s fitting that the app will encourage cafes to lead the cultural shift away from the throwaway cup. Having total control of their listing means the smartest cafes will be able to play around with discount amounts and experiment with short-term flash discounts and free coffees in order to win the hearts of bean chasers.