The early years of your period can be fraught with the fear of embarrassment. It doesn’t help that we’re still using products invented almost 100 years ago. But a new period in periods has arrived.

To launch its new Bloody Comfy Period Undies, Bonds, with agency Leo Burnett, is on a mission to inspire period confidence by encouraging teens to Live Life Unplugged. Leakproof, better for the planet, and bloody comfy, the undies reduce the need for disposable products, allowing people to experience periods “unplugged.” To celebrate this new, more natural way to period, Bonds is reaching out to teens through music.

A powerful line-up of female artists has been assembled to create Unplugged – a bespoke, acoustic-style album of songs inspired by the artist’s own period experience while wearing Bonds Bloody Comfy Undies. The album features some of Australia’s most celebrated musical talent – G Flip, Alice Skye, Montaigne, Ali Barter, Georgia Maq and Kira Puru, and all royalties are being donated to Support Act, which helps struggling artists through tough times. G Flip’s track, ‘Unapologetic’, was premiered this week on Triple J.


Says Ellie Dunn, senior copywriter, Leo Burnett: “Everyone’s periods are so different and we love that these songs express that – from G Flip’s track about being unapologetic, to Ali Barter’s tune about embracing the flow, to Alice Skye singing about a persistent mood. They’re all bloody beautiful really.”

The campaign ecosystem centres around the Unplugged album and a suite of unplugged performances recorded live at Melbourne’s Sing Sing Studios with talented producer/engineer/mixer Anna Laverty, who has worked with the likes of Courtney Barnett, Lady GaGa and Florence and The Machine. Supporting the album are two TV spots starring G Flip and Alice Skye, social and online activity, and a making-of film called, ‘Behind The Flow’.

Says Stacey Karayannis, senior art director, Leo Burnett: “We can’t make periods less annoying but we hope that after hearing these songs and the artists’ personal stories behind them that we can at least help teens feel a little more comfy and confident enough to just embrace what comes naturally.”

Says Kedda Ghazarian, marketing manager at Bonds: “Our new Bloody Comfy Period Undies are all about making life easier and your cycle comfier. It’s been a tough time for the Aussie music scene, so we’re particularly thrilled to bring attention to young women in this industry and show girls that you can go with the flow and feel bloody comfy doing it.”

Unplugged is out now and streaming freely on Spotify and Apple Music here. 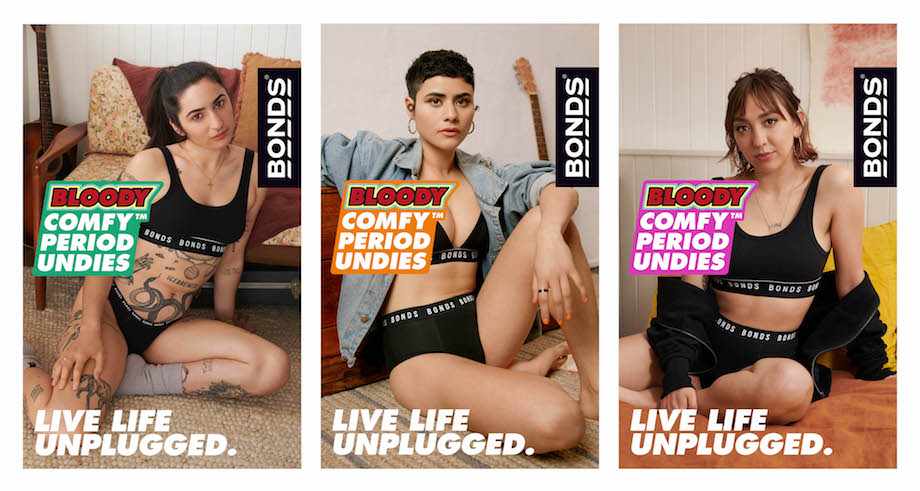