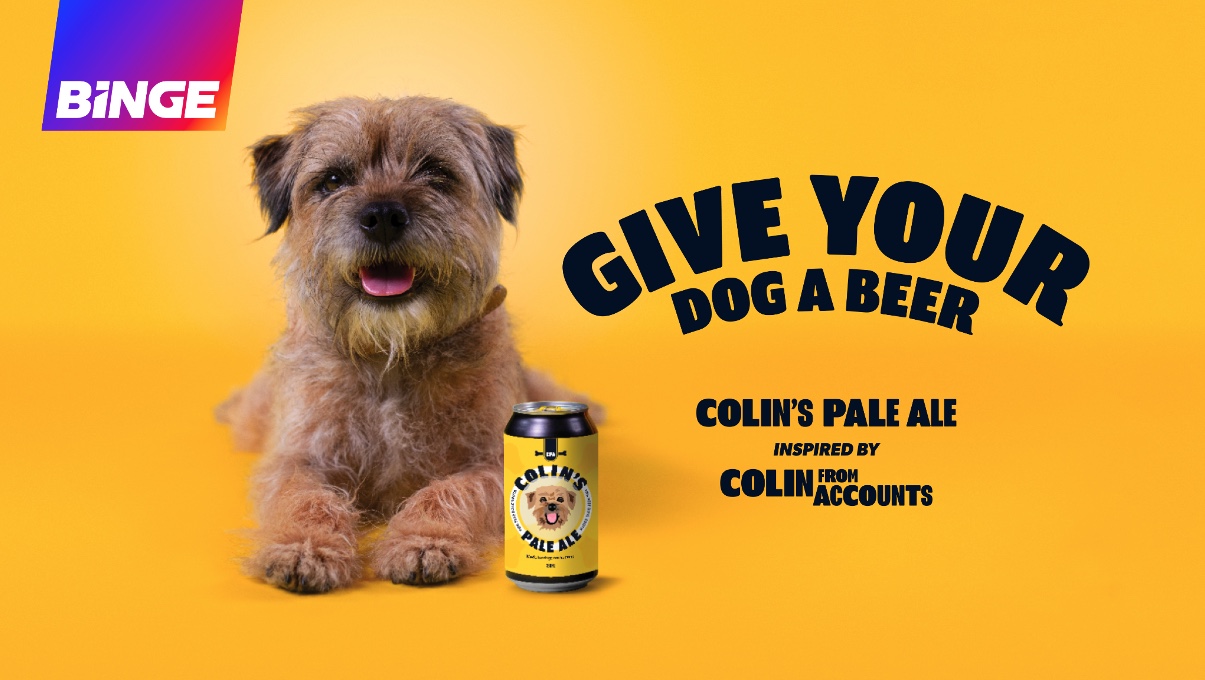 BINGE – Australia’s home to the world’s best entertainment – has created and launched its first ever beer…for dogs; in celebration of its new Aussie comedy, Colin From Accounts, a story of two singlish humans brought together by a dog, a brewery (and a nipple flash!).

Colin’s Pale Ale was developed by Thinkerbell with the help of independent brewer Hop Nation, inspired by Colin, the four legged star of the show, and the brewery which was the setting for the new comedy series. This means that now dog owners and their beloved furry friends can finally enjoy a cold one together while watching TV. The unique ‘Pale Ale’ is a bone broth, with hoppy after-notes, made from the finest beef bones, specially crafted for your four legged friends.

The Puppy Brew launch included street posters targeting pups and their owners. At dog eye level, these posters were scented to attract pooches, whilst at the human eye level they encourage dog owner humans to start streaming Colin From Accounts on BINGE and order some Puppy Brew. Australians were given the chance to get their dog’s paws on their very own four pack of Colin’s Pale Ale for free by heading to https://hopnation.com.au/products/colins-pale-ale. 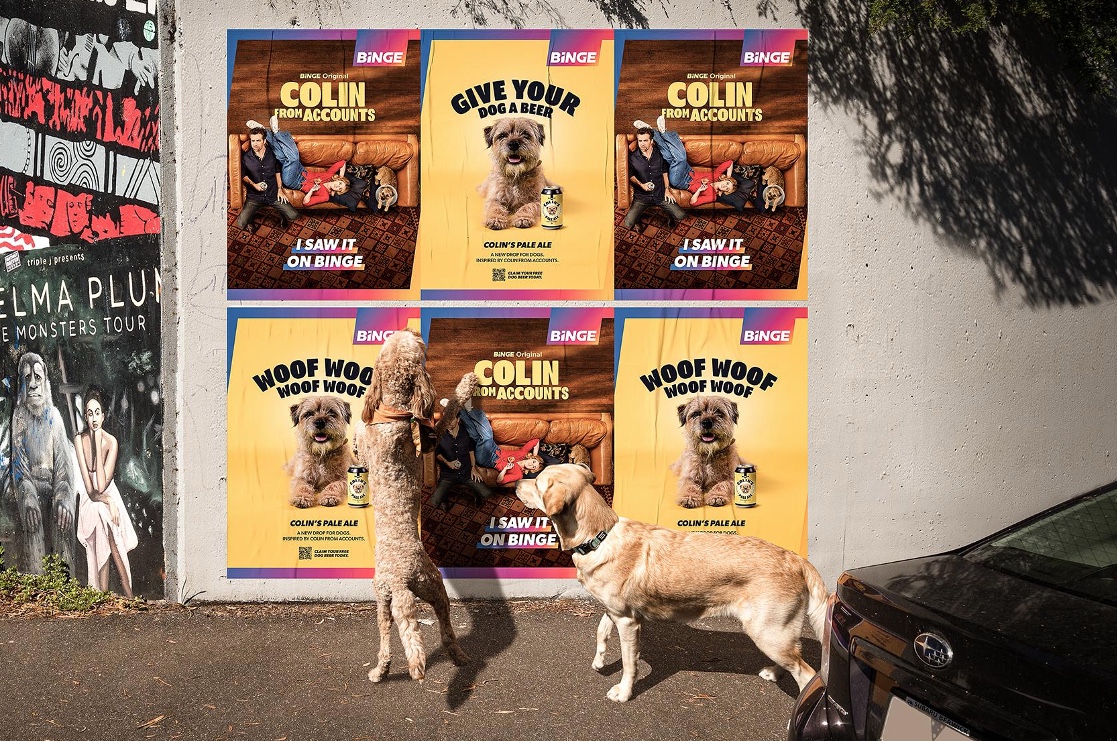 Furthermore, the project was also amplified through earned and influencer channels, as well as a connected experience with Google. Thinkerbell and Google developed a suite of content for BINGE that utilised Google’s new interactive ad experience for YouTube on Connected TV. Through interactive content shot with the show’s star, Colin, fans are invited to learn more about the puppy brew, and with the click of a button, without interrupting their viewing experience; viewers are seamlessly sent to the Hop Nation website where the beer is hosted for sale on their mobile device, while their youtube content continues to play. 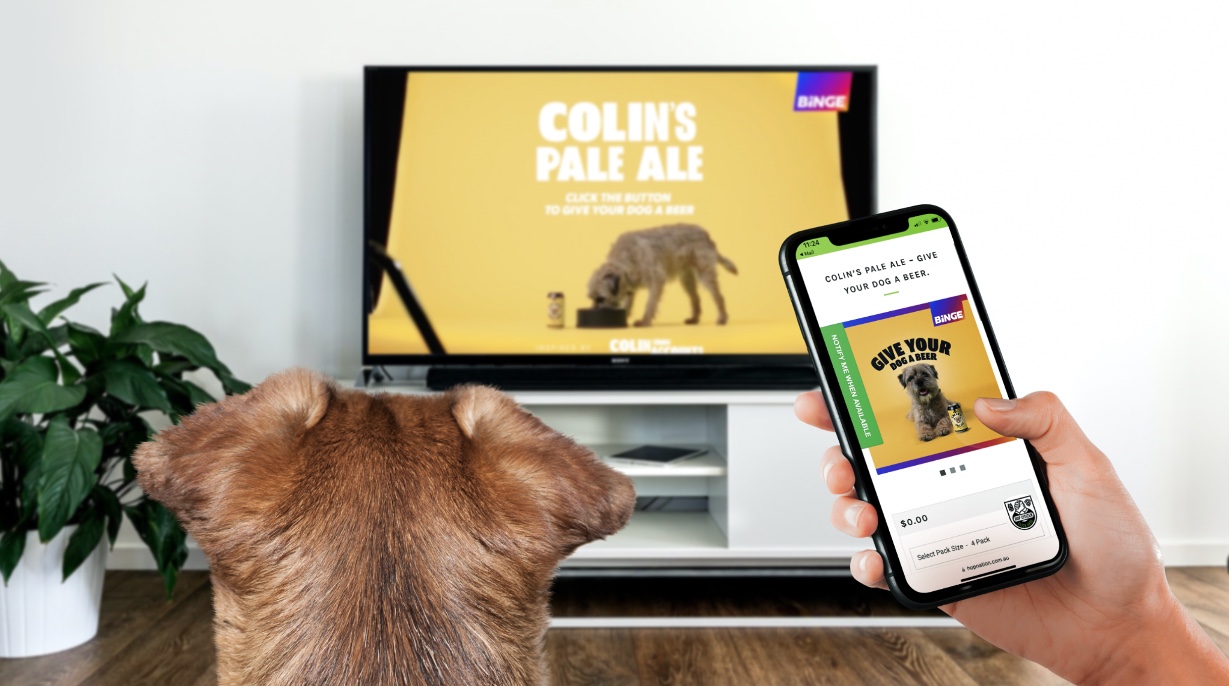 Says Tom Wenborn, executive creative tinker, Thinkerbell: “Ryan Reynolds has his Gin, Kate Hudson has her Vodka, The Rock has his Tequila… It’s only fitting that the biggest star of Australia’s latest comedy hit, Colin, gets his own beer. We’ve loved the opportunity to collaborate with BINGE, Hop Nation and Google to create some puppy-centric measured magic.”

Says Alison Hurbert-Burns, BINGE executive director and self professed dog lover: “We’ve been so thrilled to see the response to our newest Australian Original Series, Colin From Accounts, featuring the adorable Colin. And now dog owners around the country can enjoy the series with their four-legged friend, while having a beer together with the launch of Colin’s Pale Ale, a specially formulated brew just for dogs.”

Colin From Accounts centres on Ashley (Harriet Dyer) and Gordon (Patrick Brammall), two single(ish), complex humans who are brought together by a car accident and an injured dog, Colin.

The series is about flawed, funny people choosing each other and being brave enough to show their true self, scars and all, as they navigate life together. Joining Brammall and Dyer are Helen Thomson, Emma Harvie, Genevieve Hegney, Michael Logo and Tai Hara.