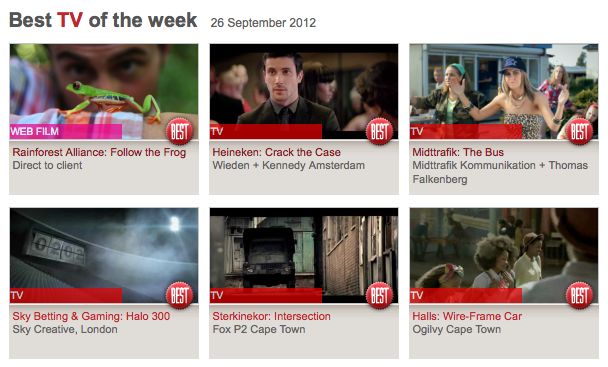 This week’s winner has to be the effort from Clemenger BBDO Melbourne for Carlton Draught. A wonderfully clever spot that’s genuinely amusing – in no small part down to the immaculate precision of the spoof – from the ludicrously cheese-y 80’s soundtrack (from the 80’s BMX ‘classic’ Rad), to the various Hollywood homages they transition through seamlessly. It’s easy to spoof something, but it’s very difficult to do it well, as Hollywood itself continues to prove on a yearly basis. But it’s hats off to a lovely spot.

Runner up I’m slightly loathe to choose, such was the quality of the winner. But we’ll go with M&C Saatchi Berlin’s spot for Oxfam Germany. The point is slightly laboured, but it makes its point well in the end – and can anyone really feel sorry for a banker in 2012? 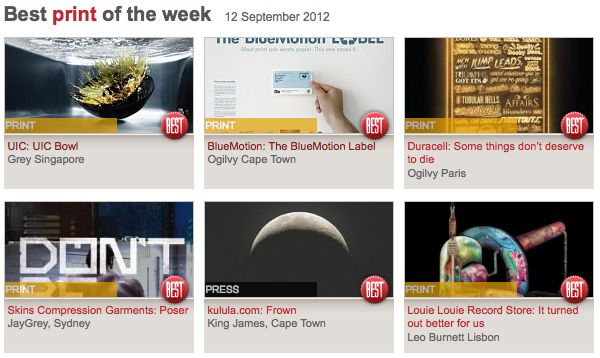 My favourite print ad this week is not in fact Lynx’s reaction to the Prince Harry shenanigans that so many loved, but the powerful piece for Ondazul Tuna in Brazil. A picture should paint a thousand words – and I think this does that very well.

Runner up would be FoxP2’s ad for MWEB ADSL in South Africa. Again, nice powerful (in this case, amusing) image and a simple message to go alongside. 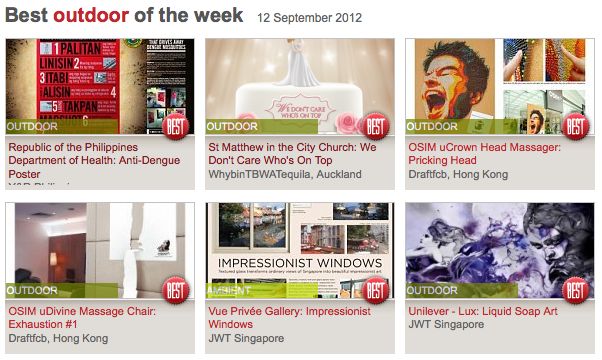 LG2’s genius piece of creative The Disappearance is my favourite outdoor effort from this week’s selection. The most satisfying creative is always one that ties in so sweetly with its product, in this case magic. Combine that with the trick of getting passers-by on the street to stop and engage with your work of their own accord, and you have all the makings of a near-flawless ad. It’s un-intrusive, it has that element of mystery and it compels you to come over and investigate further. I imagine the Quebec Magic show as a result was a roaring success.

A reasonably close second would be Lux’s Magic Shower Rooms by JWT Singapore – also using a touch of ‘magic’ to enhance the creative. They too managed to create an experience of discovery and wonder, something seemingly unexplainable and also personal to the recipient – something you simply have to share for people to believe what’s been encountered. Clever use of technology and one that again weaves in perfectly with the proposition. Commendable stuff. 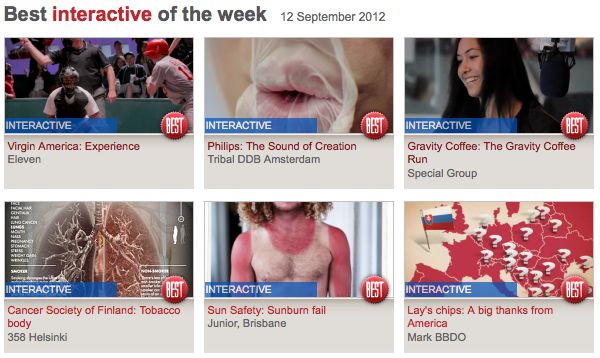 A quirky effort from Carmichael Lynch takes my final honours of the week for the Denver Museum of Nature & Science. It nicely ties in the current with the historical, drawing upon just the right amount of technology to promote its upcoming exhibition and create something innovative, educational, engaging and above all else, interesting!

Facebook isn’t traditionally a medium you would associate with standout creative, but I am also taken by the Beer Recommender app from Argentina and agency Woonky. It cleverly utilises a little information in return for something quite interesting. I’m sure there are plenty who have played on the app out of pure intrigue. Easier said than done in a crowded marketplace where more often than the not the app is created just to show off technological capability, rather than creating something humanly relevant.