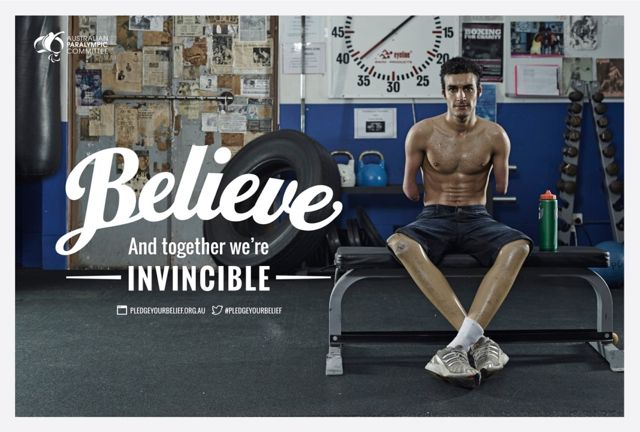 The Australian Paralympic Committee (APC) has upped the ante with a new fundraising campaign via MercerBell, Sydney.

Everyone at the APC believes wholly in Australia’s Paralympians and knows they are capable of great things. This campaign urges the Australian public to ‘pledge their belief’ in the Australian Paralympic Team.

As a charity, the APC relies heavily on public donations to send athletes to future Paralympic Games.

The uniqueness of the campaign lies in the opportunity for the public to pledge their belief in an individual athlete or team. Six Paralympic athletes are fronting the campaign at launch including gold medal winning Kurt Fearnley, well-known Paralympic swimmer Ahmed Kelly and alpine skier Victoria Pendergast who is currently preparing for the Sochi 2014 Paralympic Winter Games.

All donations will go towards helping the APC’s talented pool of athletes reach their full potential and achieve success at the Paralympic Games.

Says Ian Laing, general manager of commercial, APC: “Our research indicates there is a great public willingness to support Paralympic sport and in particular, that people identify closely with our Paralympic athletes. The Believe campaign draws on that with the aim of fostering a feeling of direct support.

“Until now, the APC has been reliant on limited income streams but this campaign will allow us to widen the net. There’s no doubt it is edgier than the APC’s usual style but given our significant fundraising challenge – and to help ensure the ongoing success of our athletes – we’re willing to challenge the status quo and put ourselves out there with a commitment to our fundraising efforts long-term.”

The campaign launch and supporting materials drive the public to a microsite – pledgeyourbelief.org.au – which features inspirational stories of all the athletes and teams involved in the campaign, plus an online donation form where members of the public can pledge their belief by choosing to make a one-off or regular contribution.  The key campaign assets include:

The APC has set an ambitious fundraising target of $200,000 to be reached before Sochi 2014* – only 44 days away. And with Rio on the horizon for 2016, the APC sees the campaign as a vital part of its fundraising efforts in 2014 and onwards.

It is expected that over time, the campaign will be extended to include further marketing and experiential activations.

Three of Australia’s leading customer experience and media agencies worked closely alongside the APC to bring the campaign to life including MercerBell, Hill+Knowlton Strategies and PHD.

In addition to the three agencies involved, Steve Greenaway and Limehouse Creative donated their photography and retouching services, whilst Michael Kennedy donated the image of Kurt Fearnley which is being used in the campaign.

Says Laing: “As a charity, we’re constantly stretched for resources so the support we’ve received from the agency teams has been an amazing help; we couldn’t have done it without them.”