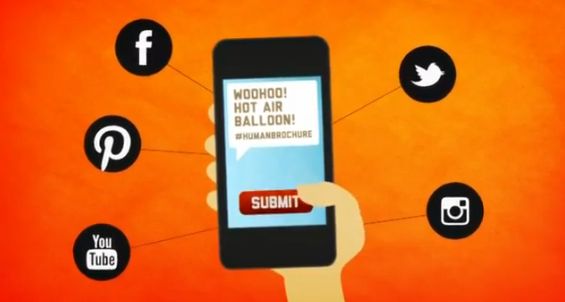 Since last week’s launch of Australian Capital Tourism’s ‘The Human Brochure’, the campaign has already received 10,000 entries in just 10 days via The Works, Sydney

The campaign aims at increasing visitation to the Nation’s capital by getting social-media savvy Aussies to share their experience of Canberra via social media. The vast amount of content produced (stories, photos, videos) will literally form the world’s first Human Brochure.

‘The Human Brochure’ is aimed at promoting Canberra as a short break destination by building a community of advocates for Canberra and increasing the volume of sentiment and social chat about it as a destination.

It provides an interesting and unique channel to challenge perceptions and change the way Australians traditionally think about the ACT; rather than telling Australians what to think, it lets them decide for themselves.

The idea behind it is a simple one based on the best marketing tool in the business – word of mouth from a trusted source. This is particularly relevant for travel, with research proving people seek peer recommendations when booking travel and that bragability is key, particularly on social media.

Research also shows the vast majority of visitors to Canberra have their expectations met or exceeded – so Australian Capital Tourism is bringing 500 social media savvy Australians to Canberra, to experience and judge it for themselves.

Participants will be selected from all over Australia to travel to Canberra for the weekend – the first group in October 2012, and the second group in February 2013.

The initial entry phase of the campaign will run until Friday 21 September 2012, with people driven to enter campaign via 500humans.com.au, as well as a facebook and mobile app. Winners will be announced on Monday 1 October.

Participants will be divided into four key interest groups based on their key interests: arts and culture, foodies, family fun and soft adventure

The Human Brochure was developed in collaboration with Australian Capital Tourism’s media agency Maxus and associated agency, The Works Sydney. Porter Novelli Sydney are involved in the national PR campaign.