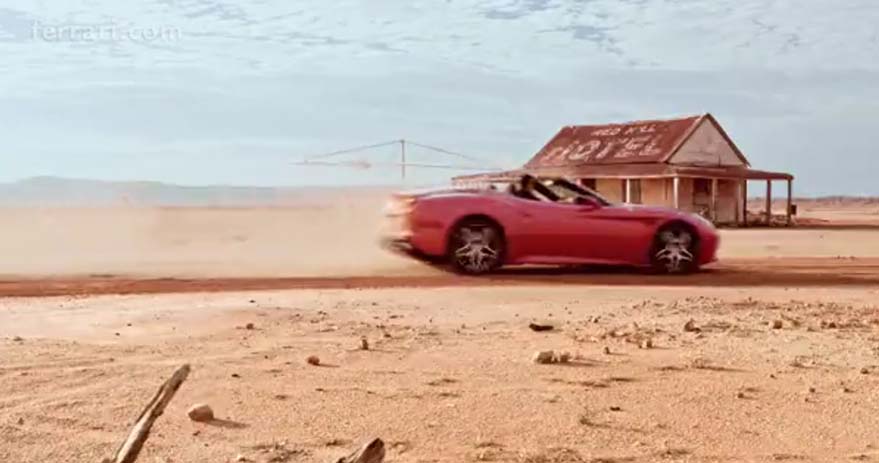 Ferrari has launched a short-film starring the Ferrari California T in Australia – from the city of Sydney to the outback surrounding Broken Hill.

Sydney and Broken Hill were chosen for their starring role in Ferrari’s ‘State of The Art’ global film series that explores the essence of the California T in iconic locations around the world. Australia is the fourth country to be featured in the series.

The film, titled ‘Night into Day’, the short film was created by Australian film director Benjamin Gartland at Bengar Films in Melbourne. It is a psychological and cinematic interpretation of the sportiness, versatility and exclusivity of the Ferrari California T; Ferrari’s successful front-engine V8 with retractable hard top and 2+ seating configuration.

Taking inspiration from the versatility of the vehicle, the Australian landscape, and pure driving emotion, the film amplifies the relationship between car and landscape to highlight the driving performance of the Ferrari California T. The film embodies Ferrari’s deeply embedded core brand values of passion, excitement, and performance.

“Australians and Ferrari owners the world over love spirited driving and unique driving experiences. In Australia we are lucky enough to have a diverse array of iconic landscapes perfectly suited to exhilarating driving,” said Ferrari Australasia CEO, Herbert Appleroth. “This film showcases the thrill of driving and evokes the true driving emotion of the Ferrari California T. It will appeal to our discerning clients for whom fun behind the wheel is a priority, but who also demand a Grand Tourer they can use every day.”

The 60-second film was funded by Ferrari’s international team, along with support from Broken Hill City Council. It was produced entirely in Australia by an Australian team and has been in development for several months. It tells a visual story on the Ferrari California T slipping through Sydney CBD at night before breaking through to daylight in the dramatic red desert surrounding Broken Hill.

Broken Hill, traditionally a mining town securely isolated and enclosed by hundreds of kilometres of desert, was specifically chosen to depict the diversity of the Australian landscape. It provides as stark contrast to the bright lights and sophistication of Sydney’s CBD and featured landmarks such as the Sydney Harbour Bridge, Centrepoint Tower, and The Australian Heritage Hotel.

“It was important to showcase the versatility of the iconic California T through iconic Australian landscapes, and punctuate the undeniable performance of this vehicle”, says film director Benjamin Gartland. “The feeling of Ferrari is unique; it’s guttural, it smacks you in the face and reaches deep within the personal self.  So, with this film we aimed at appealing to one person only – the driver.”

The iconic outback of Broken Hill, with its sandy red earth and harsh terrain, provided the perfect backdrop for the hero shot of the film, as car drives towards unknown horizons. “The Broken Hill community and location property owners embraced our team and made the filming for Ferrari an unforgettable experience,” said Gartland.

“Broken Hill is known as the ‘Hollywood of the Outback’ and the city has had a long relationship with film,” said Councillor Darriea Turley, Mayor of Broken Hill. “Like Ferrari, Broken Hill is a unique global brand, instantly recognisable for beauty and innovation that provides enhanced experiences designed to excite the senses. It made perfect sense for Council to provide support to Ferrari to produce this short film in a location that has often been recognised as a star in its own right.”

Ferrari will share the film with both national and international audiences.  It will form part of the ‘State of The Art’ global film series that explores the essence of the California T; highlighting its form not just as aesthetics, but as design and innovation that drives performance. The film will be made available to audiences through the Ferrari’s global website, Ferrari.com.