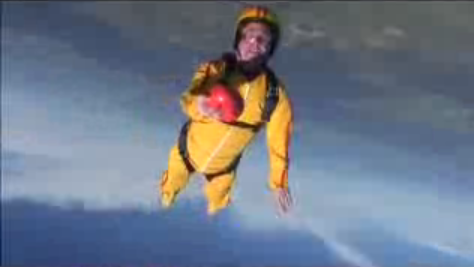 At 12:50pm on the Toyota AFL Grand Final Day, viewers saw the highest game of Australian Football ever played.  Saturday’s unofficial curtain raiser was a game played at 10,000ft, with a bunch of skydiving stars turning their skills to footy.

Falling at speeds of up to 200km per hour, two teams tackled each other and marked a specially designed football while four impartial skydivers fell with the goal posts. If you missed it, see it HERE

This was another ridiculous world first from the well-meaning Carlton Draught Sky Troopers, and an official part of the Toyota AFL Grand Final proceedings.

“We loved the idea immediately, as it’s another example the brand not taking itself too seriously,” said Group Marketing Manager Vincent Ruiu.

“Given the high production values of the networks, particularly around a pinnacle event like the AFL Grand Final, we definitely had our work cut out,” said Traffik Managing Director James Neale, “but it came together brilliantly.”

The Sky Troopers appear in ‘Sky Troop’, the most recent instalment in Carlton Draught’s “Made From Beer” campaign, which was launched in February this year.

Carlton Draught is the number 1 Draught Beer in Australia and continues to buck the category trend with double digit value growth.