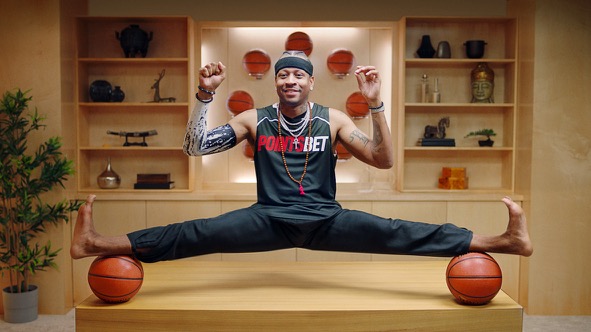 Following a strong local launch in 2017, Australia’s fastest growing online bookmaker, PointsBet, is poised to break into the highly lucrative American market. Searching for the answer to establishing themselves in the US market, PointsBet found ‘The Answer’ – 11x All-Star, MVP and NBA Hall of Famer, Allen ‘The Answer’ Iverson. After successfully establishing the brand at home, Melbourne independent Fenton Stephens handled the creative, employing The Pound’s Dogboy to direct the spots. The campaign was shot on location in New York, with Minus L assisting with production on the ground.

The spots open with two PointsBet ideas men spitballing in their new New York office. Unable to crack the big idea, they decide to ask ‘The Answer’. Inside a room adorned with the same name, we reveal who ‘The Answer’ is. NBA superstar Allen Iverson. He’s PointsBet’s all-seeing and all-knowing betting guru, and no matter the question – he’s always got the answer.

VIEW THE GIVE ‘EM MORE SPOT

VIEW THE MONEY BACK SPOT

Says Jess Wheeler, associate creative director and partner, Fenton Stephens: “We were thrilled to get the opportunity to help establish the PointsBet brand in the United States. And what a way to do it, by shooting a campaign in New York with Allen ‘The Answer’ Iverson. These briefs don’t come around every day, so we were determined to make the most of it and bring something fresh to a category that sorely needs it.”

Variations of the campaign will play a significant role in the United States, combined with an even larger media push in Australia, where the ‘PointsBet guys’ reference our local sports and markets. It will also see the brand continue their ‘There’s a new player in town’ positioning. The campaign will be supported by digital and radio executions.

Says Andrew Fahey, CMO and founder, PointsBet: “PointsBet is the only Australian owned bookmaker to gain a license to operate in both Australia and the US, so it’s a very exciting time. If you want more US betting markets than any book maker in the world, especially the NBA, we’re the answer. So teaming up with Allen was the perfect match. We can’t wait to get this campaign out into the world.”