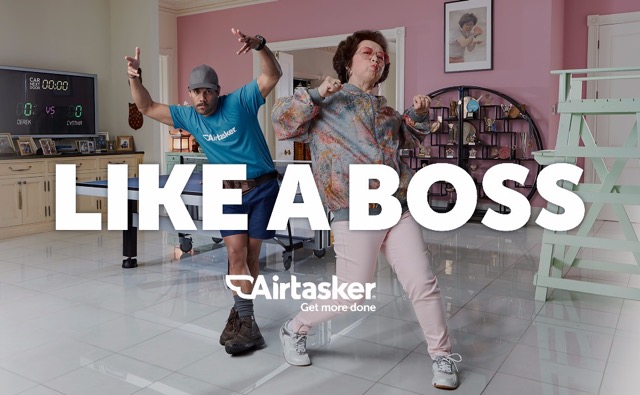 Airtasker, Australian local services marketplace, is set to hit primetime TV with the launch of Like a Boss, its first major advertising campaign via U Don’t Know Us (UDKU).

The campaign will launch on September 18 and will feature on Network Seven Sydney during the airing of the AFL Grand Final broadcast and the premiere of the new season of the X-Factor. Versions of the campaign will also run nationally across out of home (billboard advertising), online video, digital, and over social.

It serves as the Sydney-based startup’s first major advertising campaign, launching off the back of Seven West Media’s strategic investment in the company earlier this year.

Says Simon Reynolds, VP marketing, Airtasker: “The phrase ‘Like a Boss’ is all about empowerment. Whether you’re looking for more flexibility or control in the way you work, or if you need a helping hand to get more done in life, Airtasker can help.

“Our community members found a great feeling of accomplishment when using Airtasker, to the point where they just might break into dance. So we wanted to bring this to life in our first major marketing campaign.

“This campaign marks a major shift in our approach. We’ve been relying on word of mouth, but we are now using our brand to move our growth beyond “in-the-know” early adopters, and into the mainstream. We’re hoping this will help us turn Airtasker into a household name.”

Says Tim Fung, CEO and co-founder, Airtasker: “Our community members have been along for the ride with us since day one, particularly the growing number that use Airtasker as a main source of income.

“With tens of thousands of Australians using Airtasker to earn money or get things done each month, we hope this campaign and the themes it covers resonates with all of them. And like us, they get a little laugh out of it too.”

The Like a Boss campaign was created by U Don’t Know Us (UDKU), a creative innovation agency that specialises in helping corporates innovate and startups compete at scale.

The agency, founded by ad agency and management consulting executives, has flown under the radar since their formation three years ago. This advertising push from Airtasker serves as their first formal public campaign.

Says Colin Jowell, partner and co-founder, UDKU: “This is the first time we’ve been able to claim credit for our work. To now, we’ve been working on projects like concept stores, prototypes and customer experience innovation strategy-hardly the kinds of things that our clients want to alert their competitors to in advance.

“Like A Boss is one of those great creative leaps that takes something from the zeitgeist to capture the sense of achievement both Job Posters and Airtasker Workers get from using the service.

“We also sense checked it with a good old fashioned animatic test — and people actually laughed out loud at the animation which was a career first for us and hopefully a good sign for the campaign.”

Agency: U Don’t Know Us (UDKU)