The provocative ads aim to raise the public’s awareness of the wide range of social issues the existing advertising Codes cover. The campaign also encourages the advertising industry to strive to exceed the existing standards and deliver more socially progressive marketing communications.

For example, in the campaign one ad reads ‘If you’re a woman, don’t bother reading this ad’ while another states ‘This ad is for white people only’.

Fiona Jolly, CEO of Ad Standards, said she hopes the campaign highlights the ability of advertisers and agencies to have more socially progressive messaging in their communications.

Says Jolly: “There’s a perception throughout the industry that the Codes in place hinder creativity – well that’s absolutely false.

“The Codes set the minimum standards. Advertisers should not feel inhibited in going beyond the standards and aiming for more socially progressive advertising, which in turn can help companies achieve better business outcomes.

“Globally there are calls for advertisers to move away from outdated stereotypes. The World Federation of Advertisers is calling on brands to ‘unstereotype’ advertising and the *kinder conditions campaign is encouraging recognition of campaigns that are doing just that across a range of social issues.”

Jolly emphasised that the campaign isn’t finger-pointing at any industry or business in particular: “Although the Codes we’ve highlighted are some of the least complained about, we have to remind people that advertising standards are in place and they are there to achieve the greater good for everyone, advertisers and the community alike.

“In fact, it’s been proven that Australia’s advertising self-regulation complaints system is responsive, cost-effective and efficient – it protects the integrity of brands through a wide range of advertising initiatives that align with community values. It’s a win-win.”

Says Lorraine Jokovic, CEO, LOUD Communications: “There’s no denying the copy is confronting and packs a punch to get its message across. For the TVC, we employed a 1950s’ aesthetic reminiscent of a time where stereotyping was the norm.

“Together, these devices highlight how the industry can progress and move away from outdated clichés which, unfortunately, can offend and discriminate against many groups.”

To showcase its support for positive social change in advertising, this year Ad Standards is sponsoring a new Effie Awards category called ‘positive change’ which recognises and celebrates brands that are promoting the greater good through marketing communication.

In the same spirit, Ad Standards is also encouraging advertisers and agencies to nominate an ad that they believe celebrates creativity and goes beyond the already high standards in Australia to create *kinder conditions. To nominate, visit the Ad Standards website at http://adstandards.com.au. 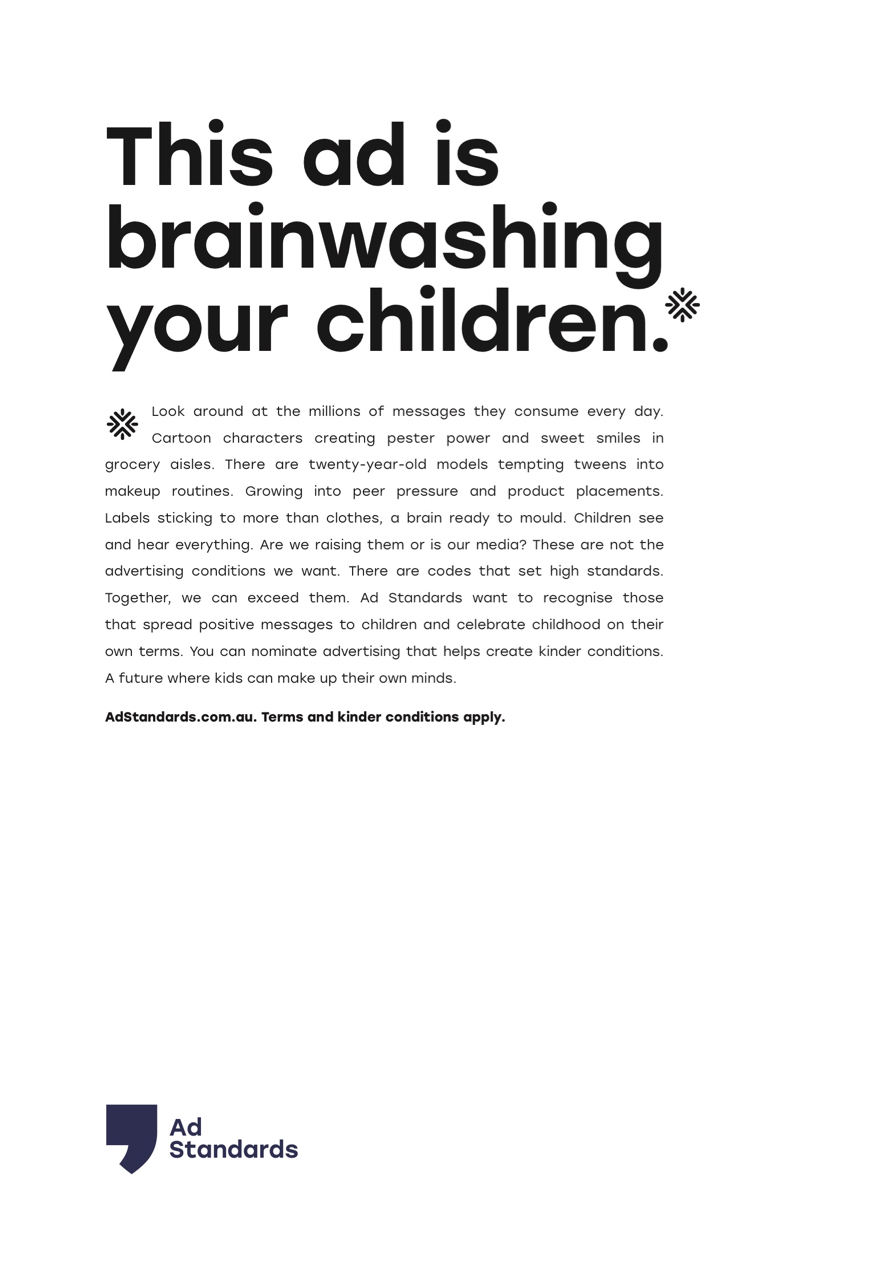 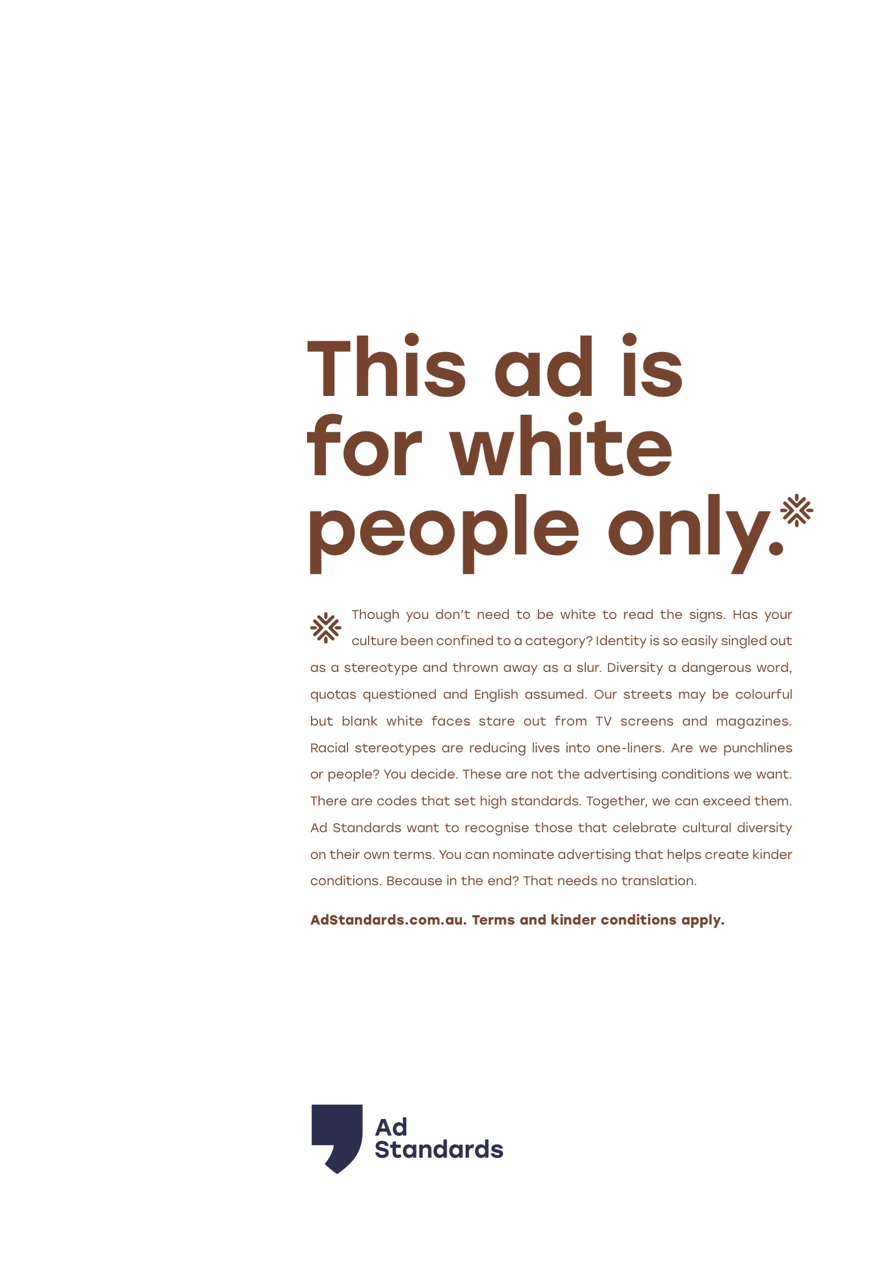 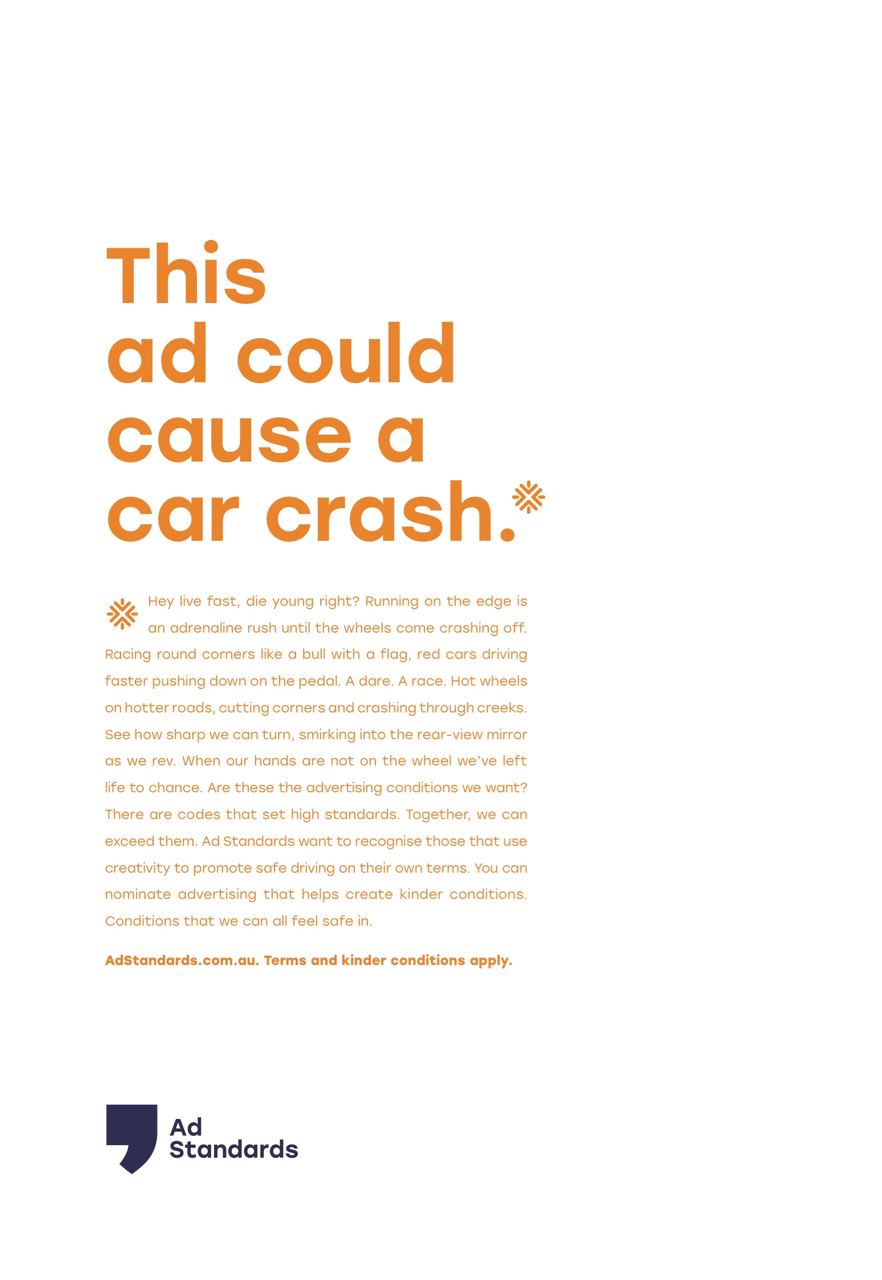 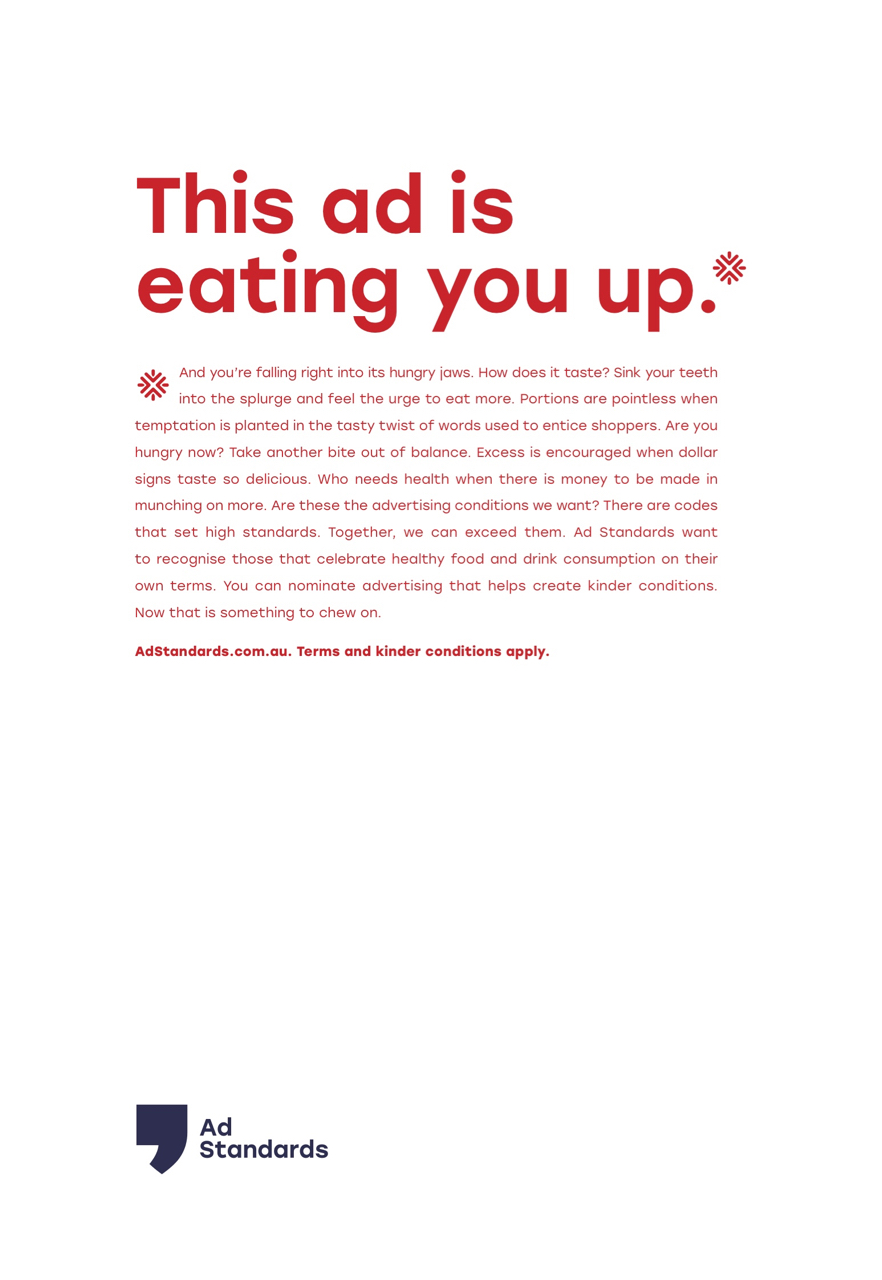 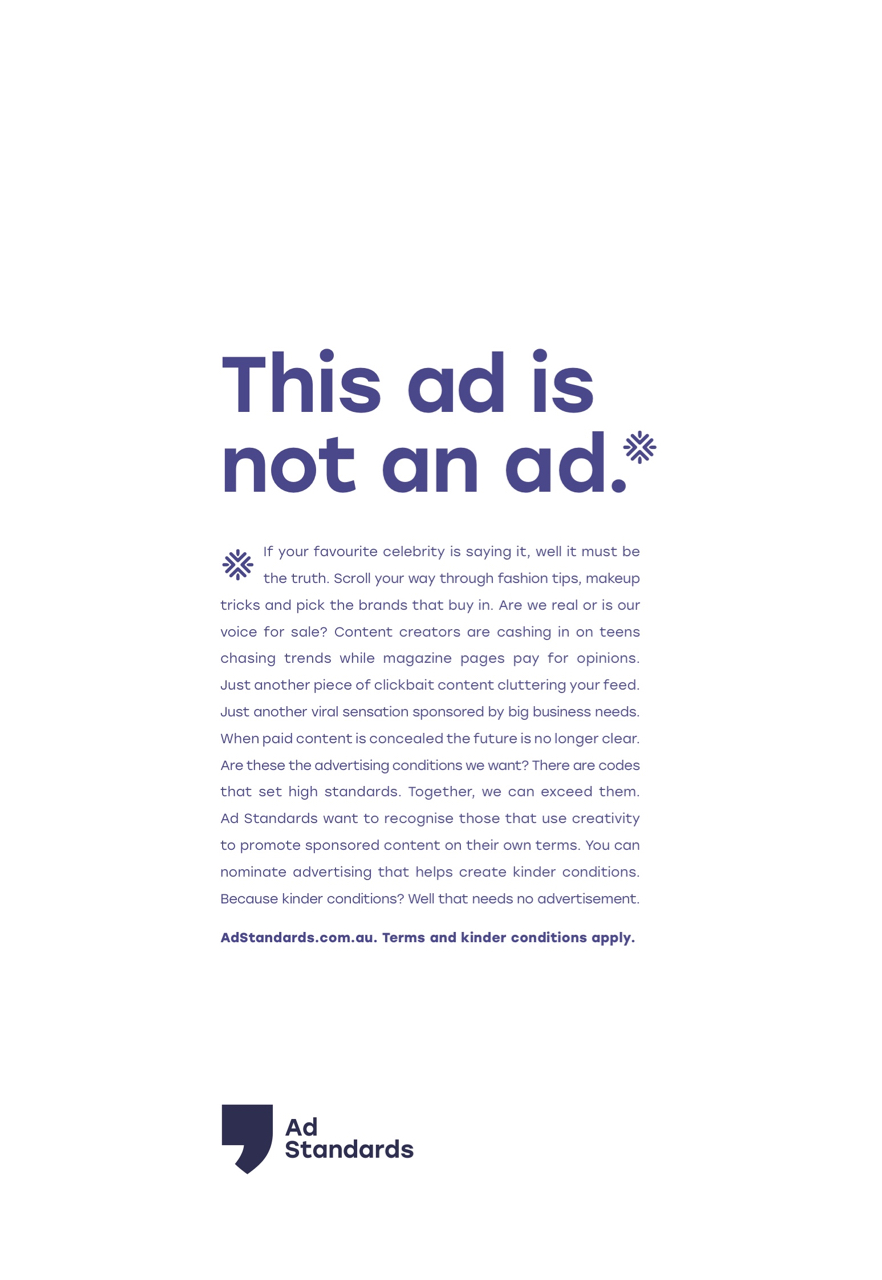 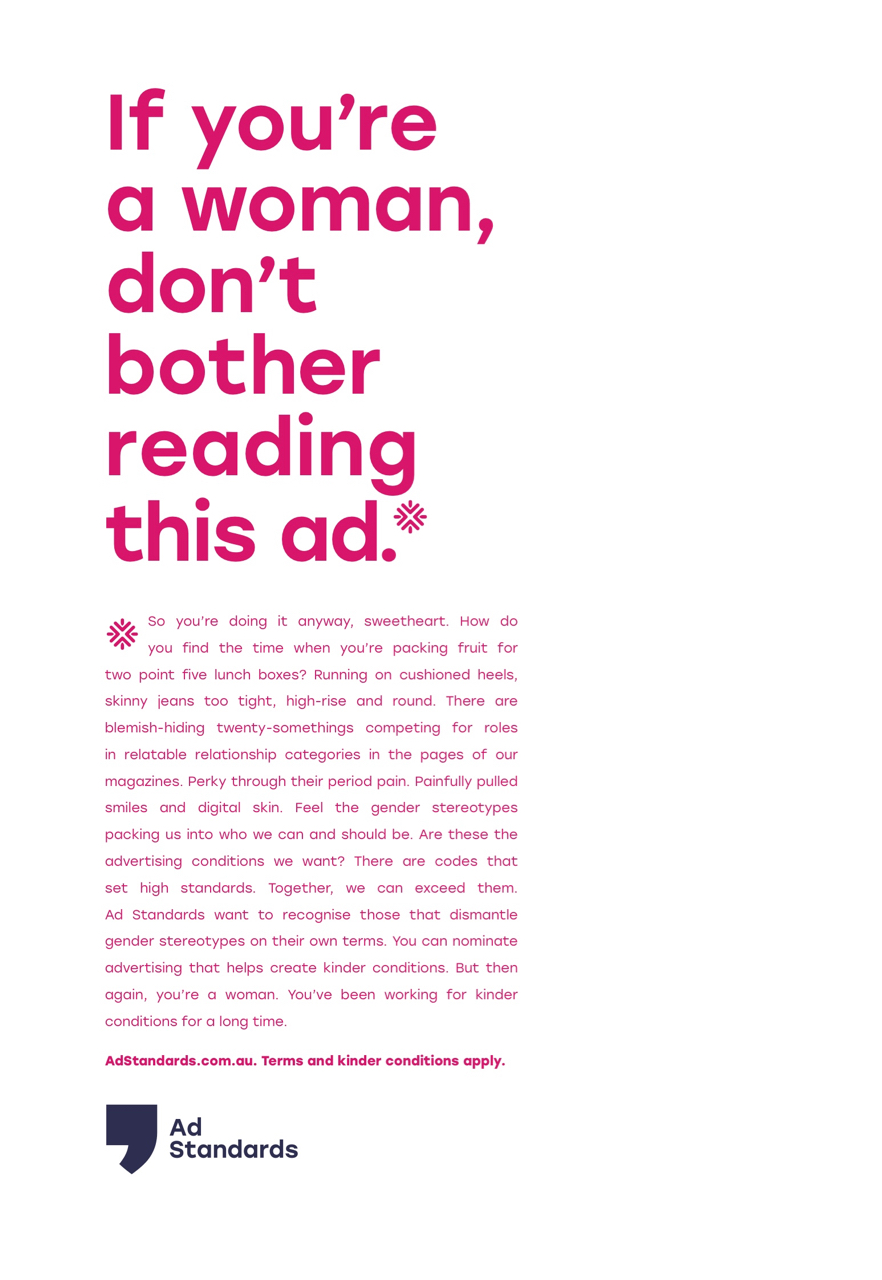