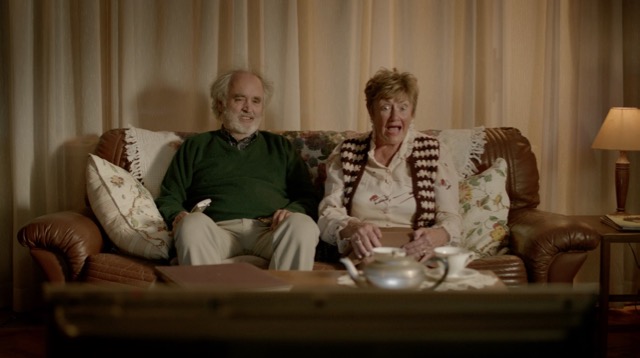 Sometime in the future in an Australian lounge room, Humphrey B Bear and a small child sit and watch Bananas in Nike Pyjamas eating Maccas while a foul-mouthed granny and her son watch Kerry O’Brien lose his journalistic integrity on the cast of Bush Survival reality TV.

As social media has aptly named her, ‘Dirty Granny’ poses the pertinent question – “What is this horse shit? What’s the ABC coming to?

Well, according to the ABC Friends foundation, a NFP dedicated to keeping the Australian Broadcasting Corporation alive and kicking, this is what the future looks like for the ABC – thanks to the brutal funding cuts endured through the Abbott/Turnbull government.

Bequeathing time and skills, production companies Guilty and Strike Pictures, in collaboration with ABC Friends, have produced a campaign with three amusing takes on what life could be with continued cuts, Humphrey (directed by Tony Rogers), Moon (directed by Tony Rogers) and Bad Reception (directed by Ben Hodson). With the Australian Federal Election looming, this national campaign is hoping to make voters aware of the ABC’s critical situation and urging support of candidates who will commit to reinstating ABC’s funding.

With Fairfax reporting remarkable success via an article published in the Sydney Morning Herald featuring Moon, the clip had over 200,000 views within the first few hours. With further exposure from other sources, figures are forecast to be over the 700,000 mark between an informal release of Moon and the official release of Humphrey. With the final two campaigns, Moon and Bad Reception still to have their official releases within the coming weeks, viewing numbers are predicted to sit well into the millions.

Says Hamish Macdonald, producer, Strike Pictures: “Very proud of the work done, and looking forward to seeing how much more disruptive our films can be as part of a wider campaign by the ABC Friends. It’s vital to shine a light on the severity of the cuts imposed and how much worse society can and will be with a damaged ABC, and hopefully help reverse those funding cuts.”

While the rest of the story is yet to come, it happens like one of those Choose Your Own Adventure books, where you can actually change this real life narrative.

Saving the ABC is more than keeping a media institution alive, it’s about maintaining a fair voice, one that can question commercial media, organisations and certain political agendas within Australia. Supporting the ABC can be as little becoming a member of ABC Friends, signing this petition or watching and sharing the campaigns with your mates, colleagues and your very own dirty grannies.