A TRIBUTE TO MO 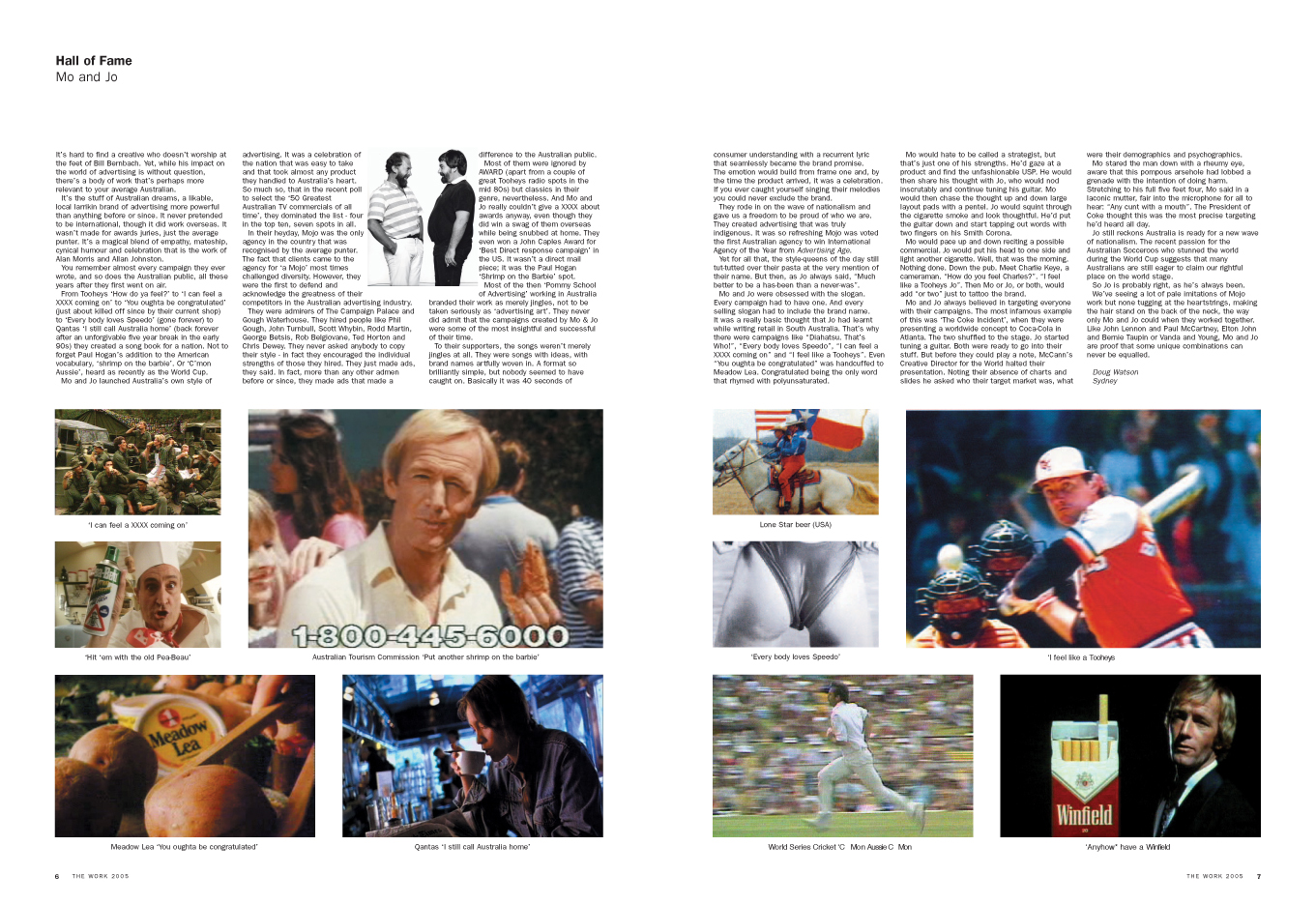 The legendary Mo and Jo were chosen for The Work 06 annual’s Hall of Fame this year, and once again Doug Watson wrote a stirring piece that captures the magic that was the life and times of Jo and his mate Mo…

It’s hard to find a creative who doesn’t worship at the feet of Bill Bernbach. Yet, while his impact on the world of advertising is without question, there’s a body of work that’s perhaps more relevant to your average Australian.

It’s the stuff of Australian dreams, a likable, local larrikin brand of advertising more powerful than anything before or since. It never pretended to be international, though it did work overseas. It wasn’t made for awards juries, just the average punter. It’s a magical blend of empathy, mateship, cynical humour and celebration that is the work of Alan Morris and Allan Johnston.

You remember almost every campaign they ever wrote, and so does the Australian public, all these years after they first went on air.

From Tooheys ‘How do ya feel?’ to ‘I can feel a XXXX coming on’ to ‘You oughta be congratulated’ (just about killed off since by their current shop) to ‘Every body loves Speedo’ (gone forever) to Qantas ‘I still call Australia home’ (back forever after an unforgivable five year break in the early 90s) they created a song book for a nation. Not to forget Paul Hogan’s addition to the American vocabulary, ‘shrimp on the barbie’. Or ‘C’mon Aussie’, heard as recently as the World Cup.

Mo and Jo launched Australia’s own style of advertising. It was a celebration of the nation that was easy to take and that took almost any product they handled to Australia’s heart. So much so, that in the recent poll to select the ‘50 Greatest Australian TV commercials of all time’, they dominated the list – four in the top ten, seven spots in all.

In their heyday, Mojo was the only agency in the country that was recognised by the average punter. The fact that clients came to the agency for ‘a Mojo’ most times challenged diversity. However, they were the first to defend and acknowledge the greatness of their competitors in the Australian advertising industry.

They were admirers of The Campaign Palace and Gough Waterhouse. They hired people like Phil Gough, John Turnbull, Scott Whybin, Rodd Martin, George Betsis, Rob Belgiovane, Ted Horton and Chris Dewey. They never asked anybody to copy their style – in fact they encouraged the individual strengths of those they hired. They just made ads, they said. In fact, more than any other admen before or since, they made ads that made a difference to the Australian public.

Most of them were ignored by AWARD (apart from a couple of great Tooheys radio spots in the mid 80s) but classics in their genre, nevertheless. And Mo and Jo really couldn’t give a XXXX about awards anyway, even though they did win a swag of them overseas while being snubbed at home. They even won a John Caples Award for ‘Best Direct response campaign’ in the US. It wasn’t a direct mail piece; it was the Paul Hogan ‘Shrimp on the Barbie’ spot.

Most of the then ‘Pommy School of Advertising’ working in Australia branded their work as merely jingles, not to be taken seriously as ‘advertising art’. They never did admit that the campaigns created by Mo & Jo were some of the most insightful and successful of their time.

To their supporters, the songs weren’t merely jingles at all. They were songs with ideas, with brand names artfully woven in. A format so brilliantly simple, but nobody seemed to have caught on. Basically it was 40 seconds of consumer understanding with a recurrent lyric that seamlessly became the brand promise. The emotion would build from frame one and, by the time the product arrived, it was a celebration. If you ever caught yourself singing their melodies you could never exclude the brand.

They rode in on the wave of nationalism and gave us a freedom to be proud of who we are. They created advertising that was truly indigenous. It was so refreshing Mojo was voted the first Australian agency to win International Agency of the Year from Advertising Age.

Yet for all that, the style-queens of the day still tut-tutted over their pasta at the very mention of their name. But then, as Jo always said, “Much better to be a has-been than a never-was”.

Mo and Jo were obsessed with the slogan. Every campaign had to have one. And every selling slogan had to include the brand name. It was a really basic thought that Jo had learnt while writing retail in South Australia. That’s why there were campaigns like “Diahatsu. That’s Who!”, “Every body loves Speedo”, “I can feel a XXXX coming on” and “I feel like a Tooheys”. Even “You oughta be congratulated” was handcuffed to Meadow Lea. Congratulated being the only word that rhymed with polyunsaturated.

Mo would hate to be called a strategist, but that’s just one of his strengths. He’d gaze at a product and find the unfashionable USP. He would then share his thought with Jo, who would nod inscrutably and continue tuning his guitar. Mo would then chase the thought up and down large layout pads with a pentel. Jo would squint through the cigarette smoke and look thoughtful. He’d put the guitar down and start tapping out words with two fingers on his Smith Corona.

Mo would pace up and down reciting a possible commercial. Jo would put his head to one side and light another cigarette. Well, that was the morning. Nothing done. Down the pub. Meet Charlie Keye, a cameraman. “How do you feel Charles?”. “I feel like a Tooheys Jo”. Then Mo or Jo, or both, would add “or two” just to tattoo the brand.

Mo and Jo always believed in targeting everyone with their campaigns. The most infamous example of this was ‘The Coke Incident’, when they were presenting a worldwide concept to Coca-Cola in Atlanta. The two shuffled to the stage. Jo started tuning a guitar. Both were ready to go into their stuff. But before they could play a note, McCann’s Creative Director for the World halted their presentation. Noting their absence of charts and slides he asked who their target market was, what were their demographics and psychographics.

Mo stared the man down with a rheumy eye, aware that this pompous arsehole had lobbed a grenade with the intention of doing harm. Stretching to his full five feet four, Mo said in a laconic mutter, fair into the microphone for all to hear: “Any cunt with a mouth”. The President of Coke thought this was the most precise targeting he’d heard all day.

Jo still reckons Australia is ready for a new wave of nationalism. The recent passion for the Australian Socceroos who stunned the world during the World Cup suggests that many Australians are still eager to claim our rightful place on the world stage.

So Jo is probably right, as he’s always been.

We’ve seeing a lot of pale imitations of Mojo work but none tugging at the heartstrings, making the hair stand on the back of the neck, the way only Mo and Jo could when they worked together. Like John Lennon and Paul McCartney, Elto
n John and Bernie Taupin or Vanda and Young, Mo and Jo are proof that some unique combinations can never be equalled.