There were several agencies that were included in the final shortlist for Campaign Brief Agency of the Year. In the lead-up to the AOY announcement, we profile those that made the 2021 CB Hot List… 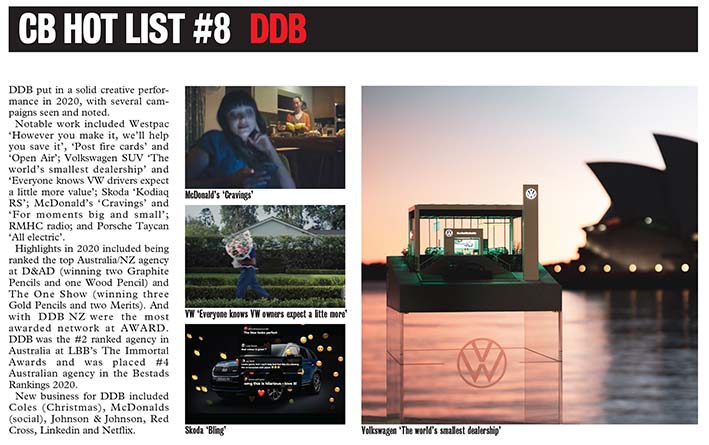 DDB put in a solid creative performance in 2020, with several campaigns seen and noted.

Notable work included Westpac ‘However you make it, we’ll help you save it’, ‘Post fire cards’ and ‘Open Air’; Volkswagen SUV ‘The world’s smallest dealership’ and ‘Everyone knows VW drivers expect a little more value’; Skoda ‘Kodiaq RS’; McDonald’s ‘Cravings’ and ‘For moments big and small’; RMHC radio; and Porsche Taycan ‘All electric’.

Highlights in 2020 included being ranked the top Australia/NZ agency at D&AD (winning two Graphite Pencils and one Wood Pencil) and The One Show (winning three Gold Pencils and two Merits). And with DDB NZ were the most awarded network at AWARD. DDB was the #2 ranked agency in Australia at LBB’s The Immortal Awards and was placed #4 Australian agency in the Bestads Rankings 2020.