Last weekend, TAB became ‘JAB’ in order to create awareness and encourage Aussies to get vaccinated so that we can get back to our beloved pubs, clubs, ‘locals’… and everything else that we love about the Spring racing and sports season. The message was simple: Australia, Spring is here and it’s time to get back to what we love.

This weekend saw the next iteration of the campaign developed by M&C Saatchi Sydney, ‘JAB for your Local’, rolled out, with the bookmaker focusing its efforts on driving home the message that getting the vaccine will see Aussies getting back to ‘their local’. It’s no secret that venues right across Australia have been doing it tough, as the industry has been severely impacted by lockdown, so TAB’s latest work is an important show of support.

Realistically, who doesn’t want to get back to their local with their mates?

While the ‘JAB’ rebrand was more of a mass message to Aussies, this week’s iteration is much more personal and focused squarely on venues. The press component captures the true stories from customers from NSW & VIC and what ‘their local’ means to them, whilst the Social/TV film evokes memories of our time spent at the ‘local’ and how getting the JAB is our ticket back to all the things we love about them.

Says Luke Waldren, TAB EGM – customer, product and marketing: “As a country we’ve endured a really challenging period with multiple lockdowns. We know that Aussies are craving a day at the races, live sport and the opportunity to catch up with friends and family at their local. A big driver behind our purpose is to create opportunities for people to come together through play, we felt that we should use our voice to support the vaccination drive and in-turn help Aussies get back to what they love sooner. Whilst also supporting our venues and the thousands of Aussies that make a living through them.”

Says Cam Blackley, chief creative officer at M&C Saatchi Group AUNZ: “TAB to JAB is more than just a cute name change, it’s a big brand doing its bit to raise further awareness of vaccine importance and accelerate vax uptake so we can get the doors of our locals open again. So publicans can make ends meet, staff get paid and we can breathe some life back into one of the great connection points of Australian society. The response has been overwhelmingly positive and I really hope it makes a difference in reaching that magic 80% number more quickly.”

Alongside the film and name change, TAB also launched a social media campaign, #JABForAustralia, asking Australians to share the JAB logo and explain why they’re getting vaccinated and donating funds to support local venues. 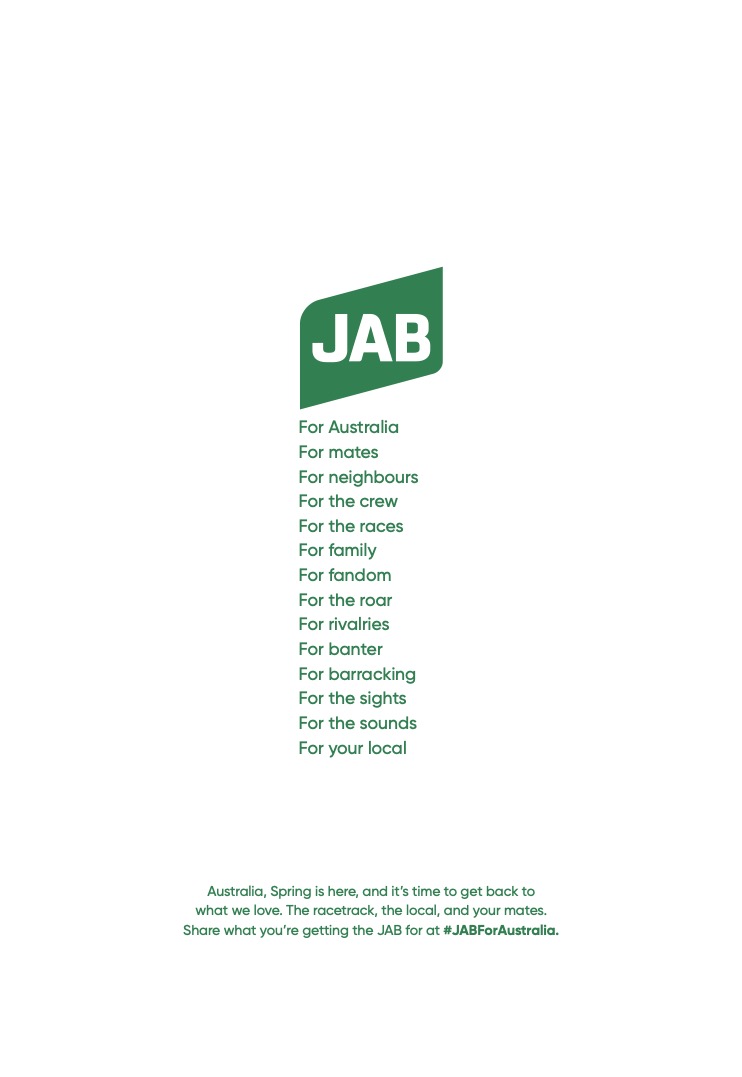 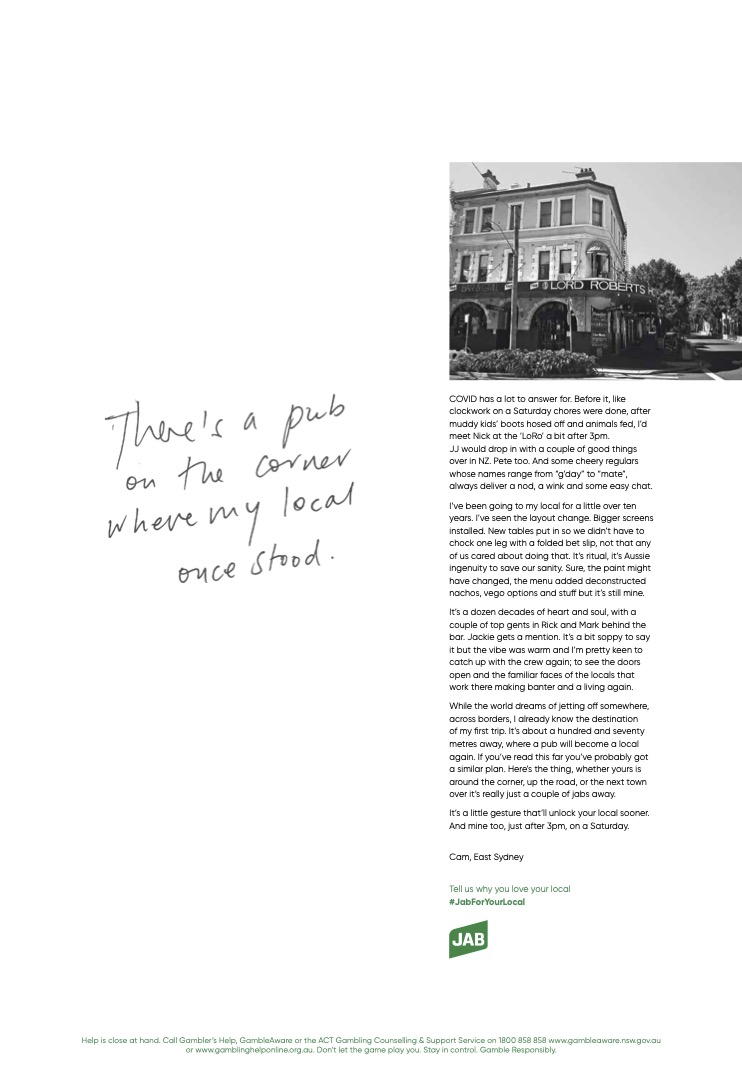 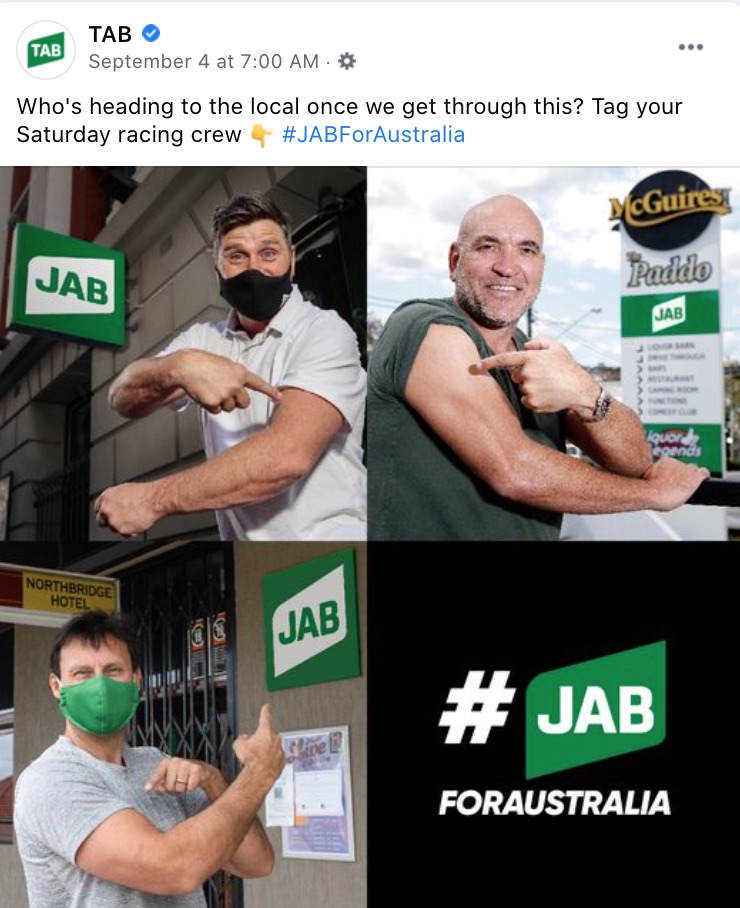 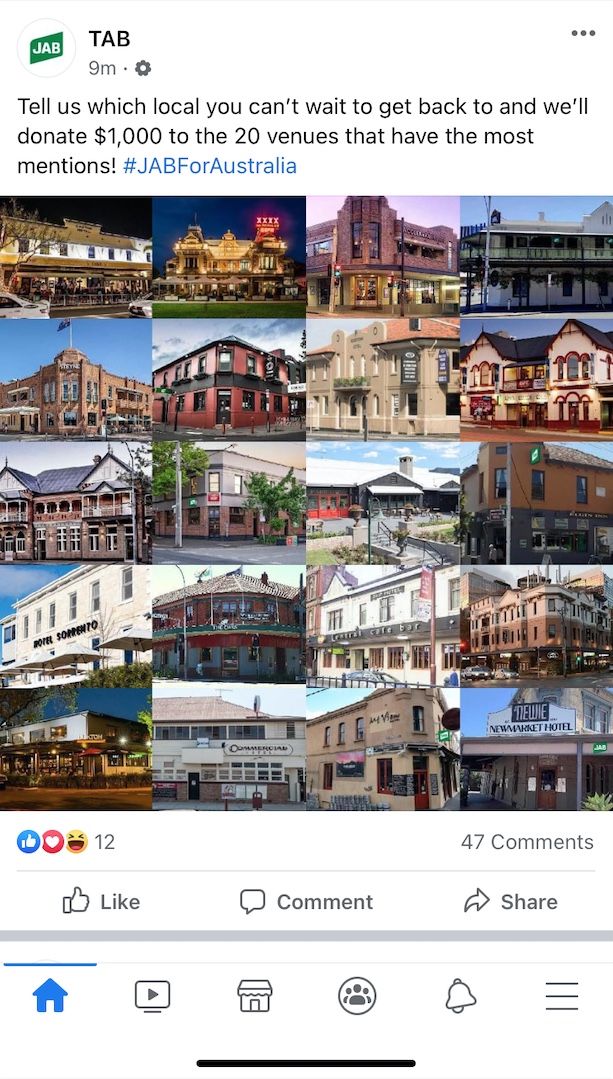