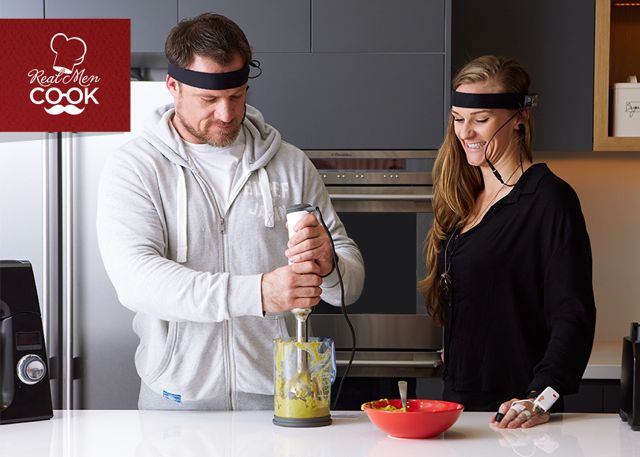 Home appliances brand Sunbeam has launched ‘Real Men Cook‘ a campaign that challenges stereotypes of the Aussie male by uncovering what domestic duties men really enjoy as well as those that satisfy and arose their partners the most.

Created by independent Sydney advertising agency The Works, the campaign is now live and will run across social media, radio and in-store POS.

Real Men Cook is the result of a high tech study conducted by Sunbeam that looks at women’s physiological and emotional responses to their male partners doing domestic chores and compares this against more stereotypical ‘manly’ activities such as watching sports, D.I.Y, sawing wood or drilling holes.

A first of its kind in Australia and conducted by Neuro-feedback U.K. company MyndPlay, the experimental study revealed that men clued up on culinary capabilities fare better than their macho counterparts when it comes to women’s arousal and happiness.

The experiment put 20 real life Australian couples through scenario based scientific testing to determine what duties carried out by the man made the woman the happiest and most sexually stimulated. For example, hand crafting a coffee or mixing a cake both outperformed using a power drill or sawing wood.

To help further understand why women are more drawn to men who are competent in the kitchen, Sunbeam shared the research with relationship educator and sexologist Dr. Nikki Goldstein to interpret.

Goldstein suggests that nowadays, women want different things from their partner. She states they don’t always need someone who can fix things or handle power tools and that cooking or baking can be a more thoughtful gesture in today’s busy society.

Says John Turnbull, general manager, marketing at Sunbeam: “Real Men Cook is a great initiative to kick off working alongside The Works. We are really impressed with how the creative agency got behind this human interest campaign.”

Says Kevin Macmillan, creative partner and founder at The Works: “This is a refreshing change for not just Sunbeam but the category. When I walk in-store it’s hard to find a reason to choose one brand over another. Building some kind of emotional connection intrinsically linked to the product is one way to start changing that. ‘Real Men Cook’ extracts many human insights and will create positive conversation for Sunbeam on peoples’ mobiles via Facebook, Twitter and Instagram and then right through to the point of purchase.”