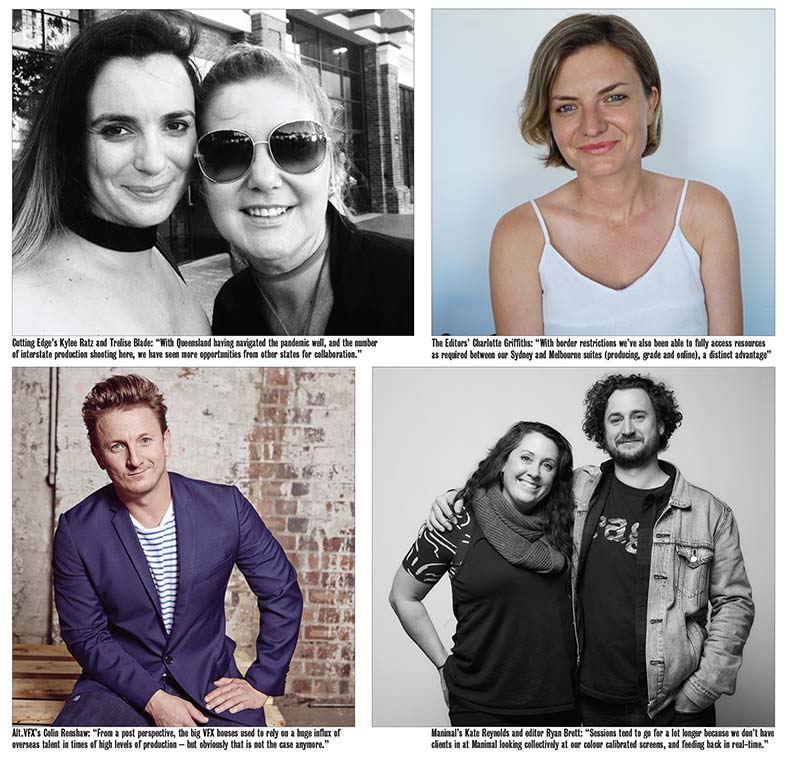 Ongoing border restrictions and forced lockdowns have seen the country’s leading post production companies continue to pivot their approach to delivering creative solutions, finding innovative and creative ways to get around the challenges of working through a global pandemic. Campaign Brief zooms in for a closer look…

The cancellation and postponement of projects due to Covid-19 has seen many post houses try to balance a mutually fair approach to the management of the pandemic with their clients and staff.

“The pandemic forced us to make dramatic, long-term changes to the way our business operated. The Editors operations manager and team of assistants ingeniously tapped into remote platforms that now have us up running seamlessly,” she says, adding “The flow on effect from the acceptance of trust around the craft in a remote work setting has enabled us to maximise the use of our roster to the market. With ongoing border restrictions we’ve also been able to fully access resources as required between our Sydney and Melbourne suites (producing, grade and online). It’s a distinct advantage to have the two; in fact our Melbourne and Sydney studios are linked by an umbilical post cord.”

Manimal owner and editor Ryan Brett believes a big challenge for the post sector during lockdown was the process of collaboration. He says: “Post production is an evolving craft; it is collaborative and there is a flow in the creative process. Being pulled away from face-to-face sessions during the various lockdowns was definitely challenging. In attended sessions, a simple tweak on the fly can take only a few seconds, but working remotely can be a five-emails process, when all creative parties are weighing in. It’s hard on everyone in that sense really, which we understand. It was just a matter of coming up with great workflows to make that process as smooth as possible.”

He adds the expectation to work out of hours had to be managed: “We tried to pull ourselves away from our desks after hours but it did feel like some projects had higher expectations and harder deadlines during lockdown.”

But the biggest challenge, Brett shares, continues to be remote colour grading. “Sessions tend to go for a lot longer because we don’t have clients in at Manimal looking collectively at our colour calibrated screens, and feeding back in real-time. Instead, we often have several people giving feedback, all watching from their various screens and monitors at home. It’s not ideal and unfortunately there’s no complete way around it. We go with the flow now, as we understand it is the new normal.” 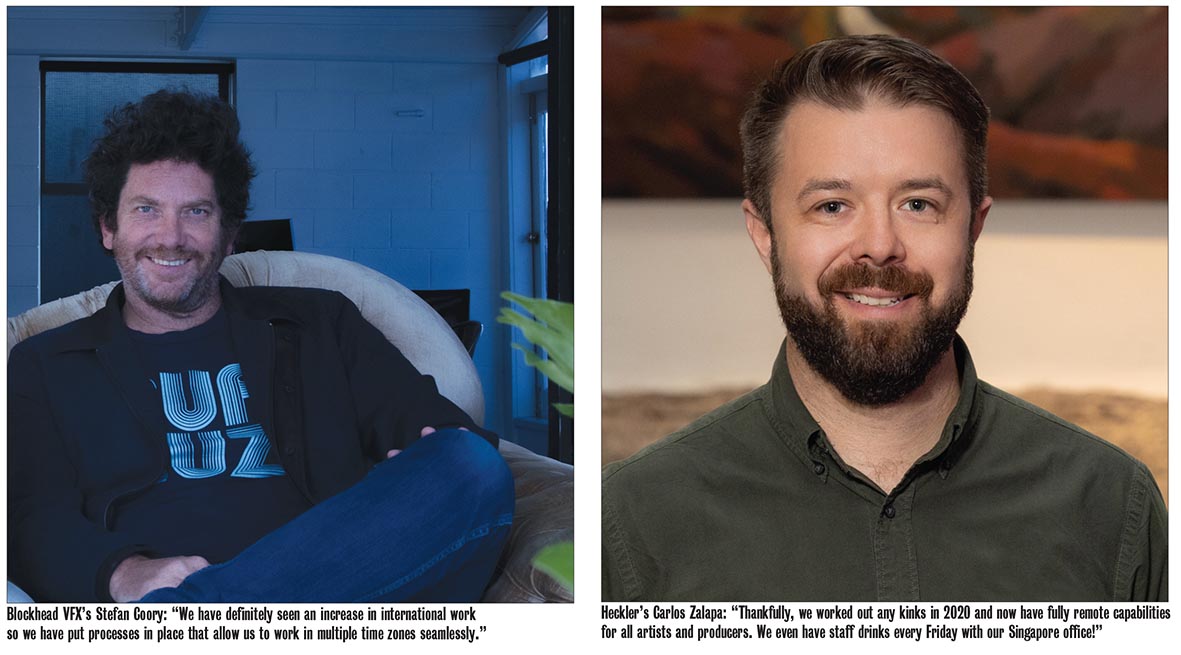 According to Manimal owner and executive producer Kate Reynolds the uncertainty of shifting schedules was also tricky to navigate: “In Melbourne, as soon as we would come out of lockdown, all the shoots were back on again, and of course all were scheduled to happen at the same time. We generally see jobs though from start to finish so we really wanted to make sure everything ran smoothly in those busy periods.”

She adds: “We’re well experienced now with remote working. We’re constantly on guard and ready to roll, so by the fifth lockdown, we had a full action plan for the snap lockdown. I think if there’s one thing that everyone’s managed to now nail successfully, after a few trial and errors, it’s remote working with clients.”

Limehouse managing director and creative partner Duncan Harriss agrees, stating: “I’m sure by now we’ve all got remote working down-pat but what can’t be replaced are the social aspects. Stuck at home you realise how important this is for learning, along with the benefits that naturally come from meeting new people. It’s these off-the-cuff moments that are easy to forget and what we miss the most.”

To do their bit, Limehouse has offered drop-in desks in its studio that can be trialled for a day at no charge by anyone in the industry working from home. Secondly, the studio is kicking off ‘Creative Circle’ events with Campaign Brief to get the industry back together and to help the impromptu happen more often.

In a time where everyday business practices have changed markedly, many studios were determined to innovate throughout the pandemic.

Heckler executive producer Carlos Zalapa says: “We sought a way to continue to engage the best global directors, albeit remotely. Now we have a methodology in place where director, agency, client and production can be based in multiple locations and we can still produce exceptional outcomes, quality and results.”

Communication is the key to good production so to stay connected Heckler now relies heavily on applications like Slack, Zoom, Clearview and Splashtop.

Zalapa adds: “Thankfully, we worked out any kinks in 2020 and now have fully remote capabilities for all artists and producers. We even have staff drinks every Friday with our Singapore office!”

Cutting Edge general manager Kylee Ratz admits production and access to new footage has been a challenge the team has overcome by reusing clients’ existing assets to reimagine some of their ideas and continue to get their messages across.

Ratz says: “Creating libraries of footage to go back and find which elements of their work could be repurposed was an exercise that continues to benefit clients even now as production becomes more accessible. Having access to CETS [Cutting Edge Technical Services] was also a huge bonus when dealing with these challenges.”

She says CETS ongoing support and knowledge in remote work, through their experience on reality TV projects, was incredibly helpful. “Their skillset was particularly evident in our VFX capabilities.”

One of the biggest and most obvious challenges of the recent lockdown is the affect it can have on people’s wellbeing. Vandal managing director Brenden Johnson says: “Lockdown has wreaked havoc on people’s mental health and livelihoods across the entire creative industry, not to mention putting a massive dent in marketing confidence. It will bounce back, but the time it takes to get back to full swing, is the time you need to be extremely clever at treading water.”

He adds: “We’ve had to continually pivot our approach and in doing so it’s helped us streamline our processes, we’ve implemented many new ways of conducting our day to day, which doesn’t necessarily sit within the 9-5 bracket anymore. Our work has become more internally distributed, and the business has become more asynchronous and malleable.” 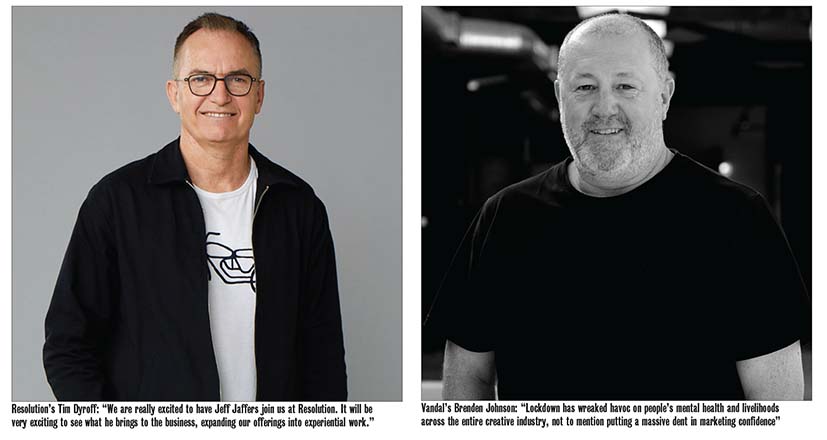 According to leading post shops, there’s certainly been an expansion of global work coming through over the past 18 months.

Blockhead VFX creative director and partner Stefan Coory says the studio has seen an increase in overseas scripts, and communications from its partners abroad. Says Coory: “While still servicing our local network, we also have a consistent flow from Asia Europe and the U.S,” he says. “We have definitely seen an increase in international work so we have put processes in place that allow us to work in multiple time zones seamlessly and honed our pipelines to support communications amongst the team.”

As well as securing briefs from its local ANZ market, Alt.vfx has been globally focused, doing work for clients from all over the world, including a raft of campaigns for clients like Taco Bell in the U.S and Bridgestone over in Japan, all in the past year.

Alt.vfx co-founder Colin Renshaw adds: “From a post perspective, the big VFX houses used to rely on a huge influx of overseas talent in times of high levels of production – but obviously that is not the case anymore, and we’ve all found ourselves, big and small, fishing for new talent in the same shallow pool. But every so often, you do find a pearl in there, and we’ve been lucky enough to add to our production team and our VFX team, with some senior roles being filled alongside a few youthful gems that will definitely grow into major talent in the future.”

Griffiths says new operational structure changes The Editors put in place last year really armed the studio to be able to take on more remote international work and for it to run as seamlessly as local based jobs.

She adds: “Stewart Reeves was behind the highly impactful New Zealand Transport Agency ‘Doors’ campaign, directed by Good Oil’s Joel Kefali, which went on to pick up Silver at AWARD, along with Gold at the NZ Axis Awards.”

Limehouse has seen more work come in from Asia, UAE and the U.S, and in general more requests for CGI and mixed media. Harriss says: “We regularly bring multiple techniques to a project, but in particular the use of FX is getting more prevalent, not only in TV but across all channels. Its use has been accelerated by Covid-19 for obvious (logistical) reasons, but mostly it is because, done well and used as a complement to more traditional techniques, it quite simply gives a better result.”

He explains historically a project would be a single approach but more often today, the team combines shoot, CGI, and animation/ VFX techniques. “With so many options available these days, taking the time to explore and select the right approach is critical.”

Heckler has been busy working on global projects each week, recently wrapping up a six-month campaign for a major European pharma brand. Nationally, it’s been working with agencies and production companies predominantly located in Sydney and Melbourne.

Cutting Edge has been fortunate to have support locally in its Brisbane hometown, as well as internationally.
Says Cutting Edge executive producer Trelise Blade: “With Queens-land having navigated the pandemic reasonably well, and the number of interstate production shooting here, we have certainly seen more opportunities from other states for collaboration.”

And although Resolution creative director Tim Dyroff admits it’s been hard to secure good talent, he says the studio has been lucky enough to acquire three new people to the team including two producers and a senior flame artist. Carolien Foley, focusing on live actions and post production, Jeff Jaffers leading the studio’s experiential offering, and Doron Man in Flame and VFX supervision.

Read more in the latest print edition of Campaign Brief