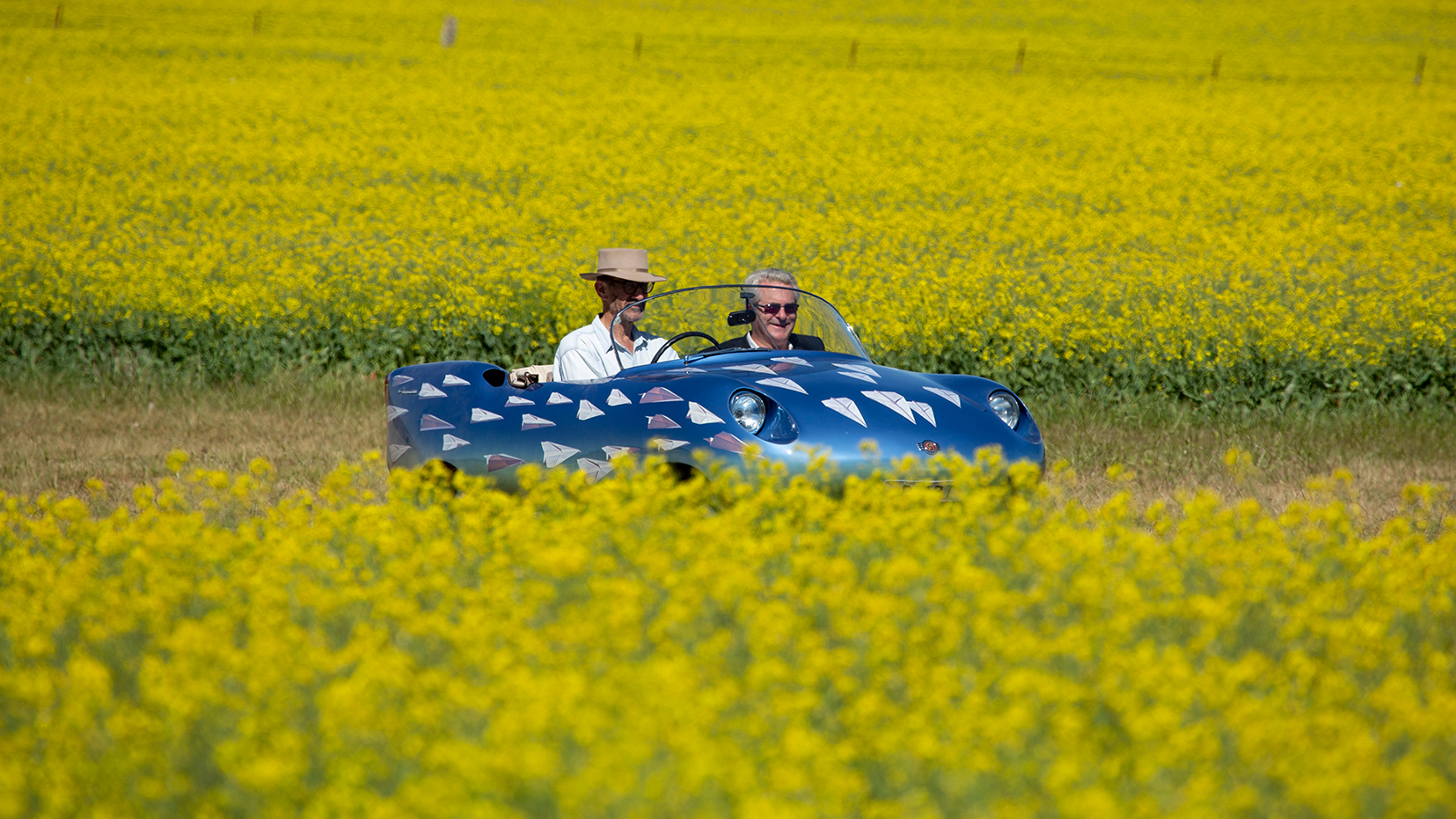 A whimsical new documentary is gracing cinema screens in Sydney and Melbourne. D’art is a feature-length documentary by Karl von Möller, which premiered at the Classic Cinemas in Melbourne yesterday to a sell-out crowd. The documentary is about a fine artist and a collector, who collaborate to turn a Goggomobil Dart into an objet d’art.

In reality, the documentary is far more than just the making of an “art car”. By association, the Goggomobil Dart car links to the artists signature “paper darts” and through this, the film explores the many links to others who have owned a dart, thrown a dart, designed a dart and even made it popular through one of Australia’s most recalled television commercials of all time.

The film interviews actors Tommy Dysart and his wife Joan Brockenshire to reveal their hilarious insight into the making of a famous television commercial for Yellow Pages, featuring a Goggomobil, created by George Patterson Bates, Melbourne (which has since morphed into VMLY&R). The ad, which ran from 1990 until 1997, directed by Ray Lawrence, is famous for spelling out the uniquely unusual name of Goggomobil, a German brand produced by car maker Hans Glas GmbH.

Director Karl von Möller contacted Sheridan Wadelton at VMLY&R Melbourne in an attempt to try to locate the master for that Yellow Pages TVC and have it up-scaled to 2K for the film. Annie Thiele from VMLY&R was able to track the master down, stored in an industrial park somewhere on the outskirts of Melbourne. von Möller has directed ads for the Australian Defence Force through VMLY&R Melbourne as well as other brands such as Kia, Honda, Nissan, Ford, Coca Cola, HP, Toshiba and more through other agencies.

View the famous ad below:

A young Bill Buckle introduced Goggomobil into Australia through his fathers’ company “Bill Buckle Motors”. Bill imported Goggomobil sedan vehicles as knockdown kits but reassembled them into functional cars by utilising fiberglass to recreate the German steeled bodied version. Before long, he wanted to design his own version by designing a sports car based on the chassis of the Goggomobil sedan. Manufactured in Sydney, Bill produced 700 hundred “Darts” as he called them & couldn’t keep up with demand.

When the mini came along, the microcar phenomena ended and the Goggomobil Dart faded into history for a while. However, in 1990, along came an ad campaign for Yellow Pages which brought the memories of the little sports car back into view. Taking advantage of its unique name, its rare status by that time, and Tommy’s charismatic Scottish accent, the ad described a problem which could be solved by using the Yellow Pages – how to find a rare part for a rare car. The ad was wildly successful and imbedded itself into the Australian vernacular but didn’t even feature a Goggomobil Dart!

The Documentary “D’art” looks at the impact of the ad, the legacy of Bill Buckle and his early entry into the Australian automotive manufacturing industry and comments on its demise. The film also looks at the process of the artist, Robert Clinch, who fastidiously paints his “paper darts” onto a Goggomobil Dart over 12 months. Together with an array of art experts, car collectors and a cast of quirky individuals, the documentary is a wild ride through popular culture, habitual collecting, and fine art.

The film will screen again in Melbourne at the Classic (https://www.classiccinemas.com.au/movies/dart) in Elsternwick on the 14th of September at 2 pm and also in Sydney, at the Ritz (https://www.ritzcinemas.com.au/movies/dart) in Randwick on Sunday the 22nd of September at 6.30pm. Both sessions are Q&A and will have the D’art Car on show at the cinema. For more about the film and further screenings, please visit https://www.dartmovie.com 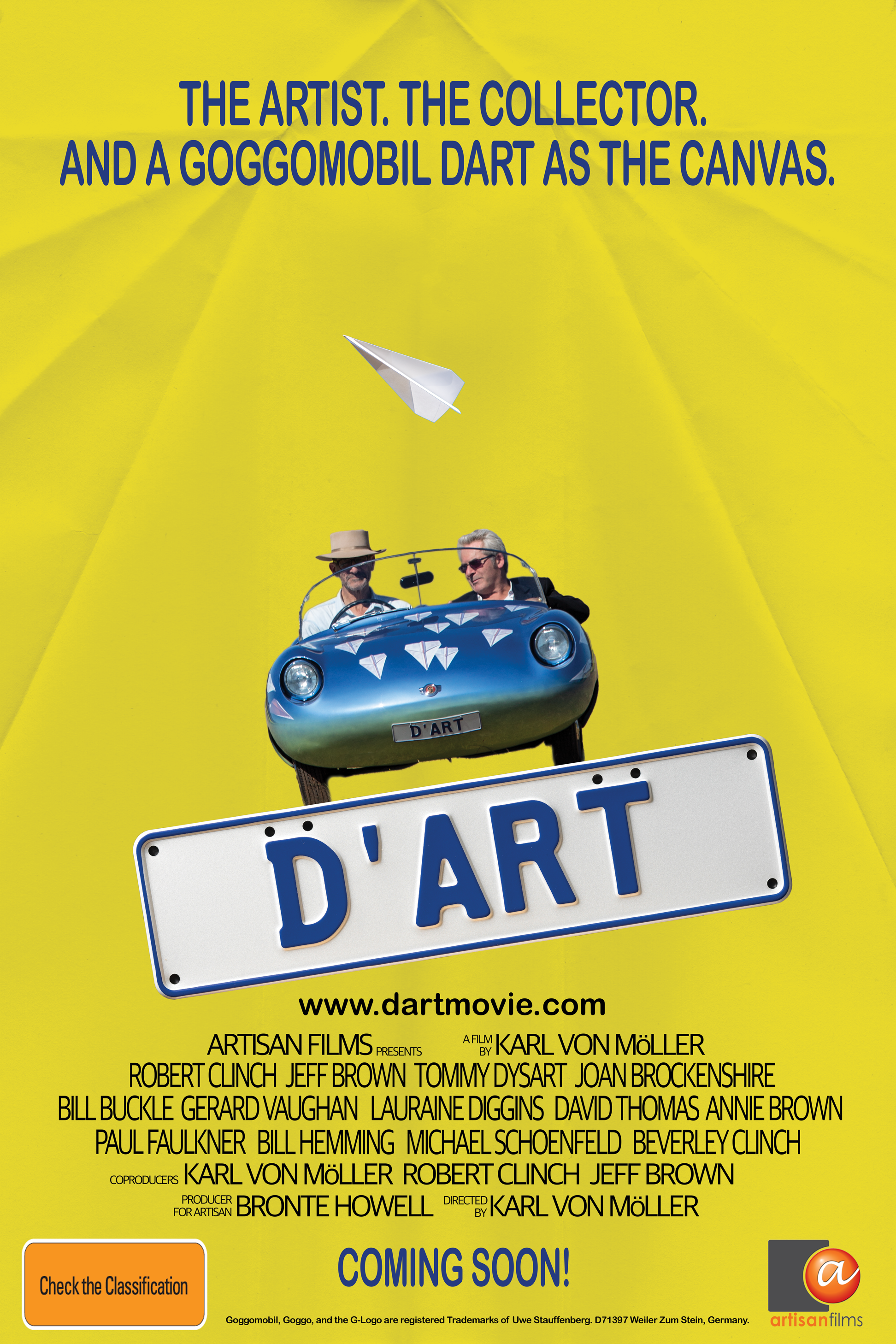