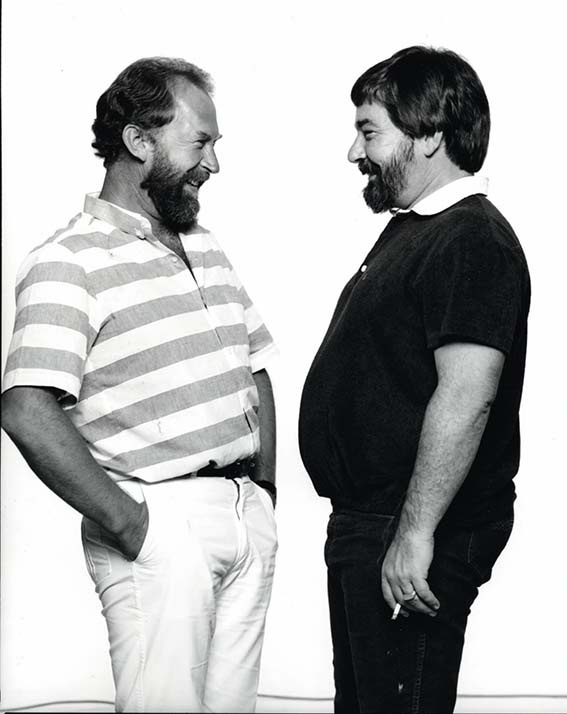 Their names appeared joined together on the credits on all 180-plus Beatles songs regardless of who wrote the words or music. To Paul however it was a case of ‘Lennon versus McCartney’ – but that’s probably what made them both so brilliant. That “very necessary” creative tension.

As teenagers – John 17 years old and Paul one year younger – met one hot summer’s day in 1957 at a Quarryman concert in a Woolton churchyard outside Liverpool. John the myopic mop-top art student, was all sadness and discord; whilst the more extraverted St Barnabas choir boy Paul, brought lightness and optimism to the partnership.

Opposites attract, as it did with Mo & Jo. And unlike many songwriting partnerships that comprise separate lyricist and composer, each created both, although neither could read nor write music.

The role of the two blur, personalities mesh, the humour and harmony of the union became larger than the sum of the two parts. Both agreed they needed their friendship and their rivalry to thrive. Early on Paul used to say, “People sometimes see it as an arch rivalry. It wasn’t. It was a friendly competition that was actually very necessary.”

The Lennon-McCartney partnership may have been the engine room of the Beatles’ success, but it didn’t earn them commercial success. That fell to Brian Epstein. A trusted fellow Liverpudlian, a little older than his new charges, he negotiated a recording contract that gave the-then self-managed Beatles one penny (1d) for each record sold, which was split among the four members, meaning that each earned a farthing a copy. (As Paul and young George Harrison were both under 21 at the time, the contract also bears the required signatures of their fathers.)

Many feel it was the untimely 1967 death of Epstein (dubbed by Paul as the ‘Fifth Beatle’) that signaled the beginning of the end for the duo and indeed the Beatles. Truth is, they needed him, when he was around things ran smoothly. He resolved disputes, mended bruised egos and managed the money, later renegotiating the royalty rate when the group signed a new nine-year contract with EMI. By the time John and Paul made ‘Abbey Road’ they were openly critical of each other’s music and a feeling pervaded that a split might be imminent.

At their peak, the Fab Two’s first single of 1967 was the epic pairing of John’s ‘Strawberry Fields Forever’ with Paul’s ‘Penny Lane.’ Their juxtaposition was a poignant demonstration of McCartney and Lennon’s respective strengths and contrasting mental states at the time – the withdrawn John struggling with a dissolving marriage and the more exuberant Paul living the life of a bachelor in ‘Swinging London.’ Yeah, yeah, yeah. To many the peak of Beatlemania was ‘Sgt. Pepper’s Lonely Hearts Club Band’ and its iconic Peter Blake sleeve design. It’s the Mona Lisa of rock albums and elevated pop music to pop art. No album has been more evaluated, enjoyed and written about.

Bonus Fact #2: Paul first wrote “When I’m Sixty-Four” when he was only 15, and then released it when his father Jim turned 64.

The gradual uncoupling of John and Paul as writing partners was initially to do with logistics. As their Beatle lives developed they were no longer living in one another’s pockets and it became each to his own. Aficionados learned to distinguish a ‘John song’ from a ‘Paul song’, not only from the lead vocal, but the tracks’ very character.

Band members became increasingly involved in outside activities and new relationships were formed with Paul marrying Linda, and John marrying Yoko at a Registry Office in Gibraltar a week later. Lennon launched an international peace campaign with Ono, spearheaded by their single ‘Give Peace a Chance.’ The formation of the Plastic Ono Band was conceived as an artistic outlet for the increasingly surreal couple. Having long attempted to maintain cohesiveness within the Beatles, McCartney secluded himself with Linda and his new family at their Scottish farm near the Mull of Kintyre, distraught at Lennon’s departure, finally acknowledging, “The Beatle thing is over.” As George might have put it, “All things must pass” and sadly, inevitably, The Beatles became ‘The Threetles.’

McCartney relates seeing a Lennon documentary in which somebody was saying, ‘I brought this record of Paul’s to John and played it.’ John went ballistic, ‘Oh fuckin’ hell, the bastard’s done something good! I love the idea of forcing him up off his arse,” (Lennon at the time was famously conducting a good part of his life in Bed-for-Peace with Yoko.)

In a 1982 interview with Canada’s Music Express, Paul recalled, somewhat ruefully, that “John was the aggressive one. The one who really wrote all the great stuff. John would actually agree because he had an ego like all of us. He’d like to be the one. He wants to be first rather than second, but I think if you had caught him in an off moment, even he’d agree I did some great stuff. I’d say that John and I were the main creative force. John, in a way, was very much the leader in the group … the most forceful personality and the wittiest.” To which John rejoined, “I’m not the Beatles. I’m me.”

Perhaps numbed by shock and grief, McCartney’s reaction to John’s murder, “It’s a drag, isn’t it?” summed up the deterioration of the personal and professional relationship between the two. The lads did tend to run off at the mouth at times: Lennon’s “bigger than Jesus” quip and the outrage Mo created with his “any c**t with a mouth” comment on Coca-Cola target marketing.

For all the pain however, the pleasure they’ve given to generations remains unrivalled. Sir John Hegarty advises, “Stay close to people who aren’t afraid to tell you when you’re wrong. You need people around you who you can trust to say, ‘That’s a shit idea.’ Every McCartney needs a Lennon.”

“Will you still need me? Will you still feed me? When I’m sixty four.” Written by Paul, but credited, as was their wont, to Lennon-McCartney; John was to admit later, “I would never even dream of writing a song like that.”  As we’ll read, Mo was to die at the age of 64.

Which two opposites partnered to produce the jingles that defined their generation?

Not for the first time, song writers Mo & Jo were lauded (Mo posthumously) at the Advertising Federation of Australia’s, now discontinued AFA Medallion as ‘The Lennon and McCartney of Australian Advertising.’

Alan Morris’ father Carl returned from World War II and co-formed – with perhaps a nod to Rosser Reeves’ Unique Selling Proposition – United Service Publicity or USP – which transmogrified into today’s DDB. Allan Johnston was one of the many creative crow eaters who made the road trip from Adelaide. Think Rob Belgiovane, the AJF lads, et al.

First impressions: I recall Al’s red Triumph TR4, the birds he pulled and the bevy-fueled Friday nights at Mullins Clarke & Ralph. He commanded fear and respect from clients and account service alike. And his very Australian (not ocker he insisted) nasal infection, colourful vocabulary and infectious belly laugh.

How does one describe those two incredibly complex characters?

Mo: Proud. Ambitious. Argumentative. Hard on the outside, but with a soft centre. A mean bastard when provoked. Clever as. Cagey, cheeky and at times unpredictable.

Jo: The songwriter, singer and poet. Shy. Never far away from his guitar or piano. Modest. Intuitive. Stubborn. Mischievous. A voice like ‘golden syrup poured over blue metal.’

Together: Laughter, fun and mateship. But sometimes a prickly pair (sic). A drink never out of the question. A true partnership, more like a marriage. Both adopted the persona of ‘ordinary blokes.’ Tribal. Loyal to those who showed loyalty. Generous. ‘You’ll be sweet, sweet, if you repeat, repeat, repeat.’  An unapologetic disdain for pommy planners and award ceremonies.

Ted Horton (another complex character) is known for his scorn of agencies’ preoccupation with creative awards, recounts Mo admonishing him, “Wh
ile you and all your poofter mates are sitting around telling each other how good you are, your mum and dad are sitting at home singing my ads.”

Unsurprisingly, the boys first met at the pub, and as freelancers at Hertz Walpole made their names with ‘You oughta be congratulated’ for Meadow Lea, ‘How do ya feel’ for Tooheys, and in 1975 opened the Mojo consultancy.

As Jo said at the time, “two heads are better than one – even if both are copywriters.” The boys forked out 50 bucks a week rent for their tiny Paddington office, and split it down the middle. They traded two desks from the then adman Peter Carey in return for two freelance jobs. Mo’s backstory to their brand name: “When people used to ring up, we’d say, ‘Ullo,’ and they’d say, ‘Is Al there please?’ and we’d say, ‘Which Al?’ and they’d say, ‘The short one.’ ‘Which short one?’ ‘The short fat one.’ ‘Which short fat one?’ ‘The short, fat one with the beard.’ So we decided to call the joint Mojo and the first call we got was from a bloke who wanted to book a table for three ‘cos he thought it was a Mexican restaurant.”

In 1979 their creative consultancy became a full-service agency at 120½  Underwood Street. Mo’s brother Don joined -“Three chairs, no waiting” – to run the boring business side of things. Their Brian Epstein if you like. Not only did Mo & Jo now have his marketing nous and selling skills, they had Judith, their canny financial adviser. Perhaps the best example of their negotiation skills was the deal struck with Kerry Packer for ‘C’mon Aussie, C’mon’ the rights for which were retained by the boys, rather than the agency. Precious few creatives own their intellectual property.

The creative tension that characterized John & Paul, existed – albeit to a lesser extent – with Mo & Jo. But as with other successful partnerships in adland it was the balance between the two that made the total greater than the sum of the parts. Alas, on a broader corporate scale, relationships can falter. In the winter of 1986, after a brief courtship, Mojo and the conservative Melbourne-based publicly-listed agency, Monahan Dayman Adams merged to become Mojo-MDA. The coupling prompted rival adman Singo to chide, “It was like The Beatles merging with the Post Office.” So it was and the Mojo culture prevailed. 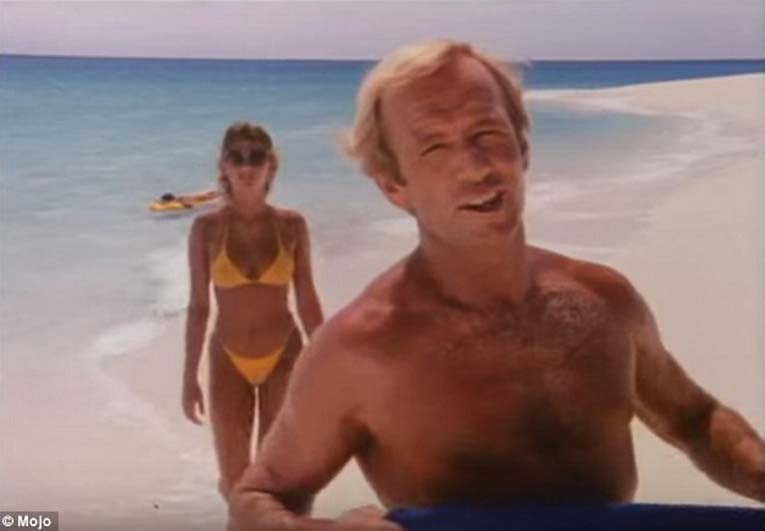 History will record that Mo and Jo changed the conversation and gave us back our Australian accent. Our cultural cringe faded as their Paul Hogan tourism campaign found international success and delivered a new sense of national identity and confidence.

Mo died on April Fool’s Day, 2007. Cancer. Age 64. “He’s not dead, he’s just gone to lunch and he’s not coming back.” Jo had lost part of himself, “We were very close. We were closer than families in a lot of ways. We could really second-guess each other’s thinking, and it was lucky we were in an era where the kind of stuff we did struck a chord.” For his part, Mo said of his mate, “Jo’s the best person I’ve ever known,” Sure, at times there were disagreements, but they never aired their dirty washing in public. No slagging off like John and Paul.

For his memorium Mo pre-planned a ‘giant piss up’ at the Sydney Opera House on April 27. Guess what? It was a Friday, and it was a very, very long lunch.

Leave a Reply to unless you were there Cancel reply