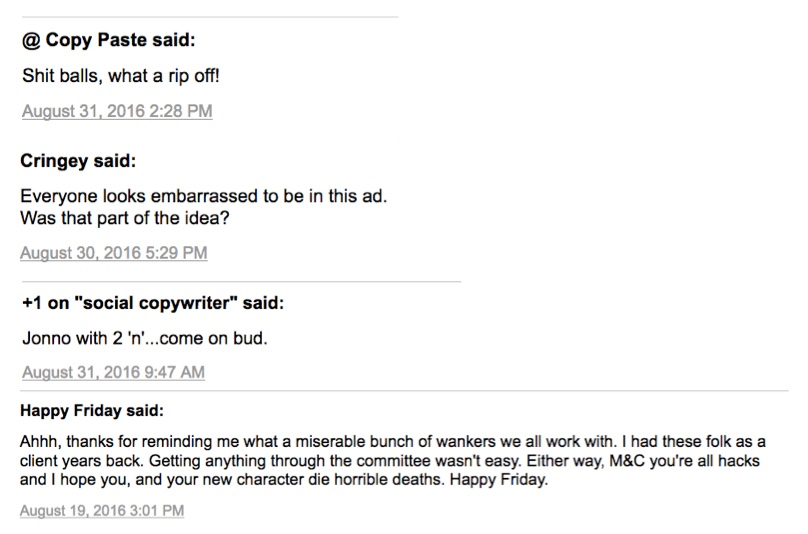 “Everyone looks embarrassed to be in this ad. Was that part of the idea?“

And my favourite: “You’re all hacks and I hope you, and your new character die horrible deaths“.

These are just some of the anonymous comments (and casual death threats) I’ve read in the last week on industry publication websites on new pieces of work and opinion pieces.

Reading these comments left me feeling saddened for our future.

You won’t like everyone’s ad, you might think it’s a rip off or lazy, you might not agree with someone’s opinion in a thought piece, or even think it was worth writing. That’s not the point.

But the lack of respect and decency saddens me. We all know how hard this industry can be. We’ve all produced work that isn’t going on our reels. We’ve all dealt with client demands, agency demands, research results etc etc. It’s not easy.

I’m saddened because whatever your opinion on the result, people believed in the work. They put their heart and soul into it, worked late, missed putting the kids to bed or simply kept themselves up all night worrying.

This isn’t a plea to silence disagreers or to celebrate mediocrity. Indeed, at Cannes David Droga declared “we spend as much time justifying average as we do creating amazing”.

This is not a defence of any particular piece of work, any article or any one person, it’s a defence of our industry.

Call me naive, pathetic, a hippie, whatever you want (just head to the comment section, you know where it is), but things need to change.

Just this week Hollywood star Emma Stone warned youngsters saying “I think young people have fallen into cynicism, and making fun of things, and pointing out the flaws in everything.” Stone cited Conan O’Brien’s Tonight Show farewell speech; “Please do not be cynical, I hate cynicism, for the record it’s my least favourite quality, it doesn’t lead anywhere. No one in life gets exactly what they thought they were going to get”.

Whether these anonymous commenters are ignorant youth or jaded oldtimers is irrelevant, this industry needs all of us, together.

Our industry is increasingly under threat as smart, talented people are attracted elsewhere. These publications give outsiders a glimpse into our world; what we create and who we are. Advertising has always struggled with it’s reputation, is this really the image we want to portray? Where anonymous cynicism, anger and out and out bullying is thriving? Where, in response, people just shrug with acceptance and say ‘that’s just what this industry is like’.

John Bartle called cynicism the enemy of creativity. And fellow BBH legend Jim Carroll said “We have a saying here that ‘positive people have bigger, better ideas’. I believe it’s true.” Ideas are fragile and they need the brave to create and nurture them.

So let’s drop the cynicism. Let’s acknowledge our reality. Let’s get out of the comment section. Let’s be positive. Let’s build bigger, better ideas. And give them a chance.

And if you’re really so brilliant at advertising, maybe spend the time and effort it took you to anonymously abuse fellow professionals, into making work that your clients are paying you to create.