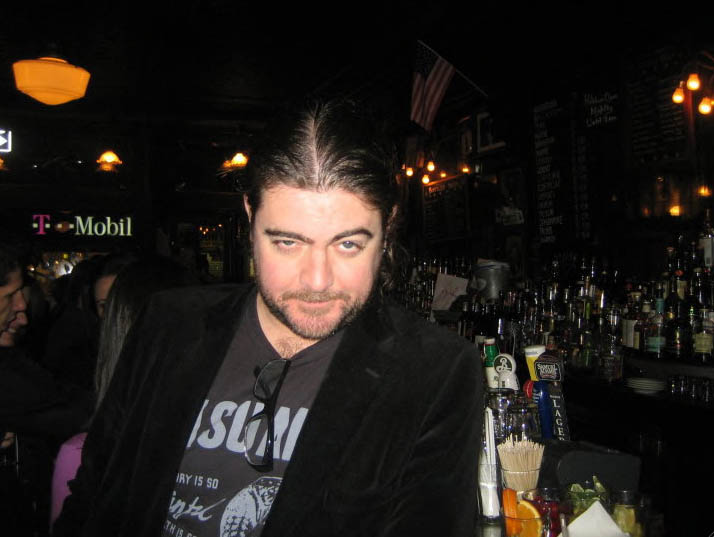 I decided to get out of Dodge.

Although hard to believe, the place gets a bit boring.

Sure, it’s one of the great world cities…a ‘must see’.  A city to visit. It spikes you with an adrenaline rush the like of which you’ve never felt before. But you live there for a few years in a small, boxy, over-priced, one bedroom flat, and it quickly grows monotonous. The excitement wanes when you realize that most of the restaurants, bars, clubs are all the same.  Same food.  Same layout.  Same clientele, give or take.  And nobody’s really from New York.  It’s just one vast, expensive dormitory city.

People go there to work. They live to work.

And if you’re planning to seek your fame on Madison Avenue, beware of that particular career lure. It’s an ugly corporate working environment. An advertising city of madmen (and women).

I moved from one massive agency to another just to check this was not an unfortunate and isolated finding.

In the big shops, the contrarian who speaks out is ‘a problem’…’not a team player’.

Office politics are rife.  If you ain’t good at them, don’t bother going. Fear reigns and every place gets wet. You need to smile all the time.

And behind it, people don’t much like each other.

Like something Orwellian, they’re encouraged to behave like hungry, gnawing rats in a cage.  Departments full of back-stabbers. Be careful using a cuss-word in an internal meeting…that junior account executive just might ‘come over all traumatized’ and report you to HR. And she’ll get away with it too; such is their terror of litigation.

There is a disease that has permeated our industry. 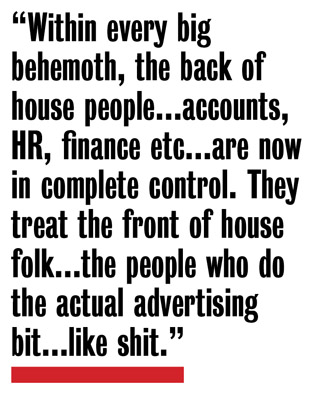 Within every big behemoth, the back of house people…accounts, HR, finance etc…are now in complete control. They treat the front of house folk…the people who do the actual advertising bit…like shit.

Wanna make a million dollars on your bottom line?  Don’t pay staff their expenses for a few weeks…and when you do get round to it, give ’em a cheque (there’s an extra few days in there) and we can make money off the money we owe them.  It seems to have gone un-noticed somewhere, that without the front of house people, there’s no back of house in this game.

At a dinner in Hong Kong, my friend Jules sits beside the CFO of one of the big four global holding groups.  She congratulates him when he tells her that he has just turned in the best profits of any agency in the history of the ad business.  “You know where we got it?” he chortles with a nudge and a wink…”from the staff!”…as if he was some sort of calculator-banging Einstein.

Look at my beautiful house.

Look at my beautiful wife.

Look at my beautiful children.

Look at my beautiful watch.

Now, let’s go to the Hamptons.

Like its adland, the land of the free is also in deep doo-doo. Politically broken…lobbyists appear to rule the roost.  Spending rages out of control.

Although people tend to scoff at this suggestion, I believe there is a high possibility that Romney will take out Obama come November.  The latter’s re-election is by no means a foregone conclusion, despite the best-of-a-bad-lot-buffoon the Republicans have thrown into the ring at him.

Obama is undoubtedly a statesman; intelligent; a brilliant orator who has been responsible for a revolutionary new way of delivering healthcare.  Swedes, Norwegians, Australians, all scratch their heads in puzzlement at why Obamacare is such a big deal over there.  Shouldn’t everyone in society – your fellow countrymen – be allowed to get treated and healed of what ails them?  In America, they speak of ‘open-wallet surgery’.

And yet for all that, many view Obama as something of a mediocre POTUS.  A lame duck. 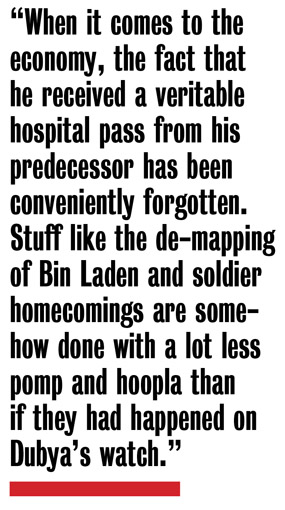 When it comes to the economy, the fact that he received a veritable hospital pass from his predecessor has been conveniently forgotten.  Stuff like the de-mapping of Bin Laden and soldier homecomings are somehow done with a lot less pomp and hoopla than if they had happened on Dubya’s watch.

Here’s how Obama can lose: he only barely got in the last time.  He got in cos usually apathetic (with every reason) African Americans bothered to come out and vote in huge numbers; the Republican-leaning Hispanics also voted Democrat in his honor; and he secured the young vote – largely on the back of an exceptional piece of online marketing.  Well, right now, the general feeling amongst the minorities is that none of the ‘Hope’ he promised in 2008 has been forthcoming.  The disenfranchised see him as ‘in-the-pocket’ of corporate America (what President isn’t?).  And the country’s young voters, are those that have suffered the most in the recession: unemployment in their ranks is well into double figures; and more youths are out of work today than at any time since the aftermath of WWII.

More advertising and marketing money will be spent on the upcoming slagging match than ever before, with estimates ranging in the $6-7bn range.

A guy shoots up a cinema and half the country runs out to buy a gun.

The rest complain that the only reason the carnage was so bad, was that there weren’t other gun-holders at the movie who could have taken down the shootist.  Just imagine that scene!  Where’s Batman when you need him?

You encounter a graduate from one of the top universities who doesn’t know his star sign from his elbow; nor the capital of Canada; nor the five previous Presidents of his own country (“Was Kennedy one?”) and he’s holding down a pretty cool job in advertising.  He then gets shirty with you when you ask him whether he thinks it’s important to like, y’know, know…stuff?

As I read somewhere recently, the trouble with children these days, is that they have a Google answer for everything.  And the same thick school-kids bully their elderly bus monitor and stick it up on YouTube cos they think such behaviour is “awesome!”

When I say thick, I also mean thick, as in fat.  Single serves of popcorn the size of picnic hampers…industrial vats of Coke…a nation predicted to be over 50% obese by 2020 with all the inherent diabetic medical diabolics that will bring.  Australia isn’t too far behind.

I could go on…the still-close-to-the surface racism; bigoted, insular and hypocritical communities marching across the plains under the banner of Christ.

The place is broken.

I suspect there is another major crash on the short-term horizon.  If Europe doesn’t get there first, America will bring it down and most of the world will
come along for the ride again.

I showed a draft of this article to an American friend of mine in the advertising business.  She read it and proceeded to go apeshit on my ass in a way that would put the Campaign Brief blog to shame:

“It’s too negative…you sound like a cranky old man who’s been in the business too long. And yeah, New York is full of self-important advertising douchebags, but New York is not America.  Our country is not broken we are progressive and innovative and lead the world in almost everything.  When you’re a leader, you fail at things.  We fall down a lot, but we get right back up and fight even harder.  Many of the things the world can’t live without – Apple, Google, facebook – all came from America (and none of these were created in New York).  Our dirty laundry fascinates, and is always on display. People want to love and hate us, but that’s all ok.  When I go to other countries, I realize how amazing we really are.  Overseas, people don’t smile and everyone seems miserable.  I come back home and everyone smiles and says hello and you feel joy.  We are leading the world, trying to set an example and doing the best we can.  And we’re proud of it.  Free speech is our bloodline. Oh and one last thing, we are incredibly good looking, have nice teeth and amazing hygiene.  Europeans like you should take a lesson.”

Who wants to argue with an incoming missile attack like that?

Certainly not this smelly Irishman.

Perhaps it is unfair to bash America.

The majority of her populace are indeed good people and I have a great many pals there.

It is geographically stunning.

But I believe The United States is a country that could and should be doing much better.

Will it ever lead by example again?  This young country the rest of the world has looked up to almost since its inception.  One that has guided development and democracy, and ideas and human rights.

Before I left, I took a spin down to Washington DC to see ‘The American Idea’ as it was originally intended.  It’s so inspiring: this work-in-progress of Jefferson, King, Lincoln and the guy the town’s named after.  Great men who are probably turning in their statues when they see the direction their country is pointed right now.

It’s hard to know where to start…I have spoken before of the need for a new ‘ism’ in the world…maybe an America that is bankrupt in so many areas can shake the Etch-a-Sketch and start over. For if there is one country in the world that still truly has the brains and the brawn and the can-do-spirit to restructure, reorganize, reinvent and reinspire, it’s probably the United States of America.

Sean Boyle is a cranky old man who has spent too much time in advertising.  Most recently he was the Global Head of Strategy for Gillette at BBDO, New York.  He has also worked as a Global Head of Planning at JWT, New York and was a member of The Worldwide Planning Board at Saatchi & Saatchi, based in Asia.

Leave a Reply to lover not a hater Cancel reply