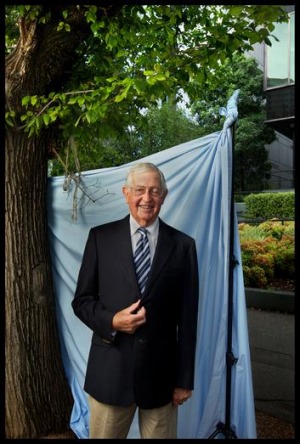 Ad legend and Clemenger co-founder Peter Clemenger and his wife Joan have both scored a rare double in the Australia Day honours, each becoming Officers of the Order (AO) for their support of the visual and performing arts and their philanthropic work.

Joan Clemenger is an honorary life benefactor of the National Gallery, an honorary fellow of the Heide Museum of Modern Art and a supporter of organisations ranging from the National Council for Circus Art and Orchestra Victoria to Big Brother Big Sister and the Royal Botanic Gardens.

The pair have undertaken and supported numerous activities through the Joan and Peter Clemenger Trust established in 2001.

Support from the Joan and Peter Clemenger Trust has been important to medical research in Australia. Providing funds for the Mental Health Research Institute, the Centre for Eye Research Australia, the Peter McCallum Cancer Foundation and the Murdoch Children’s Research Institute and a number of other research initiatives.

Earlier this year, Peter and Joan were presented with the “Visionary Arts Award” for Australia, recognising their ongoing commitment to enriching our communities through the arts.

They have been generous supporters of the National Gallery of Victoria (NGV) for more than three decades.  For example, in 1991, they established the triennial Clemenger Art Award dedicated to supporting the exhibition and purchase of artworks by contemporary Australian artists, which was awarded from 1993 to 2009.  Further, in 2011, they generously supported the creation of the NGV Contemporary Art Space, and provided further funding towards delivering a range of projects within the space.

Last year, Peter and Joan Clemenger brought to 21, the number of Melbourne Theatre Company play commissions they have supported over the past eight years.

They have also contributed to the arts by working with the Australian Ballet to enable international artists and companies to tour Australia, funding the Ballet’s 50th Anniversary Gala, and supporting emerging talent through the Australian Dance Awards established with Ausdance in NSW.

They firmly believe that supporting educational and welfare institutions enriches our community and ensures that tomorrow’s leaders will have experienced the best possible opportunities available to them in their formative years.  They have made substantial support to Anglicare to assist the organisation in addressing the needs of vulnerable children, young people and families and to introduce innovative new approaches to addressing existing problems.

These are just some of the areas in which their support has made a real difference. Their generosity and involvement in so many worthy causes has been extraordinary.