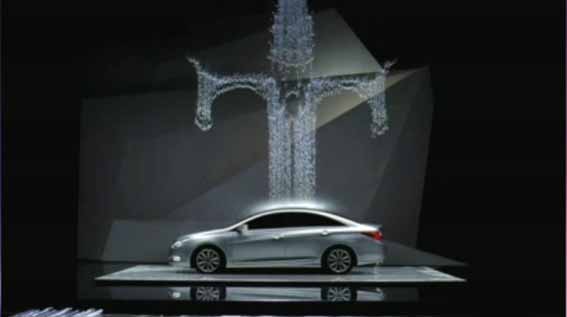 Hyundai Motor Company Australia, via Innocean Worldwide Sydney, in partnership with creative consultancy Disciple, launches a new campaign this Sunday for its all-new mid-sized sedan, i45.

The television commercial will be the first element of a significant integrated campaign. The spot, directed by Bruce Hunt via Revolver, was filmed entirely in-camera, brings to life in water the tests, commitment and investment that Hyundai has dedicated itself to, in bringing every i45 to market. The thought behind the campaign is ‘Driven by Obsession’ and is borne out of Hyundai’s passion for quality.

View the making of i45 TVC

The Hyundai i45 is part of the new Hyundai design philosophy of’fluidic sculpture’. Central to the execution of the creative idea, isan amazing use of water droplet technology in both the TV commercial,and throughout the fully integrated campaign. Using a highlysophisticated rig flown in from Canada for the stunning water effect,the team created a range of beautiful imagery and shapes within thecascading water.

The rig has 720 individual water droplet controls on the screen, eachone set at a 10ml spacing. Each droplet has a solenoid valve on it, andeach solenoid valve is controlled by a computer. One of the key imagescreated by the water droplets is that of a massive sword being “thrust”into the i45. 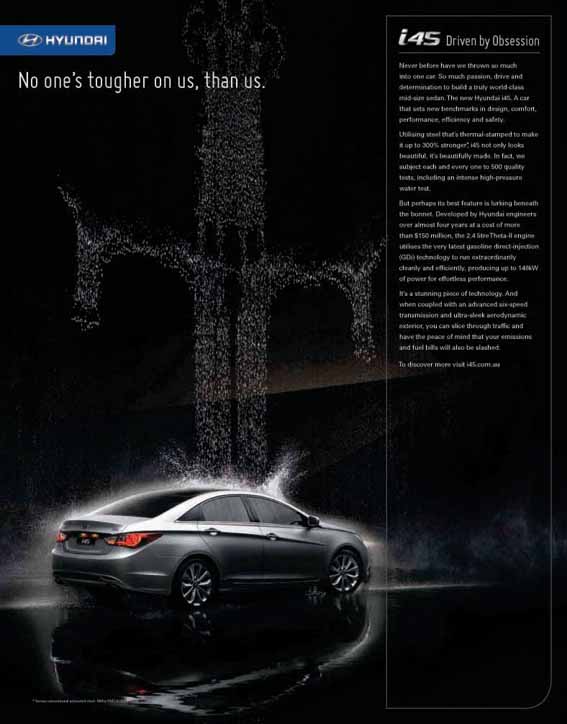 The campaign includes television and cinema, some striking printexecutions, an extensive online schedule, point of sale, OOH anddisplays at airports.

i45 is targeted at a new consumer for Hyundai who is looking for astylish, quality built sedan, but is looking for more than just basictransport. When you open the doors and sit inside the new i45, theconsumer will discover that Hyundai has put just as much thought intothe interior’s design as well as they have the exterior – setting newbenchmarks in design, comfort, performance, efficiency and safety.

Says Oliver Mann, director of marketing for Hyundai: “i45 marks thenext chapter in the Hyundai story and the latest model in our ‘i’series. And as such, we’ve created a campaign that takes our brand to anew level and reflects our passion and quality. We’re all proud of thenew campaign and believe it will give us the strongest possiblefoundation for the launch of the all-new i45.”

Adds Kate McGeoch, group business director on Hyundai at InnoceanWorldwide: “The use of water to bring to life Hyundai’s commitment toquality creates not only a powerful story, but delivers an engaging andbeautiful experience for the viewer”.

Says Tim Brown, creative partner at Disciple: “We’d seen graphicwaterfalls technology at trade shows and felt that using it was abeautiful and captivating way to tell our story. Full marks to BruceHunt and the production team for creating an elegant piece of film.”