CB Exclusive – With the ANZAC centenary looming, ANZAC Appeal organisers are tapping into new technology platforms to encourage support from Australians this year with a campaign breaking tonight via DDB Melbourne, Tribal Worldwide and Mango Australia.

In a fundraising first, the ANZAC Appeal has created ‘The Minute of Silence’, a pre-recorded minute of silence which can be purchased by phoning 1902 25 04 14 or texting SILENCE and state to 1999 1234.

The recorded Minute of Silence includes 80 currently serving and former Australian Defence Force members and their families, including veterans from conflicts as recent as Afghanistan and Iran and as long ago as WW2, Korea and Vietnam and was recorded as the platform for the campaign.

VIEW ONE OF THE PERSONAL CASE STUDIES

The TVC will be aired by Channel 9/Win from tonight and is supported by a plethora of other generously donated media, including tram faces, press, outdoor posters and FM and AM radio nationally. The RSL has also negotiated AFL and NRL game screen time during the matches on Anzac Day on April 25. 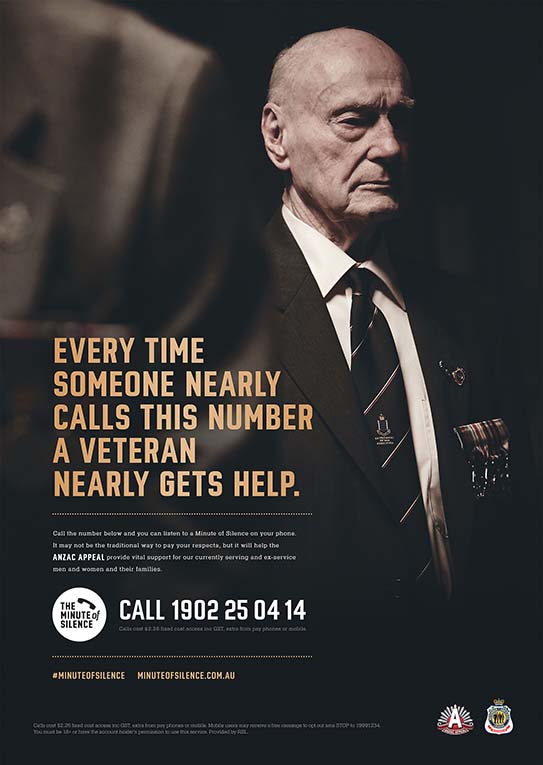 Says DDB Melbourne executive creative director, Darren Spiller: “At first glance you think we are asking people to buy nothing, but as you delve deeper into the campaign you realise that you get a whole lot. Memories, stories, learnings, sorrows, reflections and resolve. It’s amazing what a minute of silence is really made up of.”

The multi-faceted campaign includes a central website designed and built by Tribal Worldwide Melbourne. Says general manager of Tribal Worldwide Melbourne Rich Lloyd: “The concept of using your mobile phone to pay to listen to silence felt like a really powerful way of flipping the traditional use of familiar and accessible technology. Anyone that buys a minute of silence receives a text link to the supporting website where veterans thank them for doing so. The website also includes ways of donating to the Australian Defence Force – and the personal stories of what those heroes think about during their minute of silence I found very moving. Having newly arrived in Australia from the UK, I was also surprised how much this project gave me an insight into the values of held by Australians, particularly the value of mateship.”

According to ANZAC Appeal national spokesperson, Afghanistan veteran, ex-Commando and double amputee, Damien Thomlinson, the Minute of Silence enables anyone with access to a phone to support the Appeal.

“The fundraising landscape is changing and to enhance the valuable work that the RSL’s traditional fundraisers do by selling ANZAC badges on the streets of cities and towns across the country, the Minute of Silence will allow Australians to support the cause directly from their mobile phone or landline,” says Thomlinson.

“Our aim is to not only raise funds for the Appeal around the nation, but to highlight the valuable work that the RSL does with past and present service men, women and their families, and the work they will continue to do”.

“The RSL helps service men and women of all ages, the currently serving as well as older veterans. The way we help them varies too from financial assistance, living expenses (rent, bonds and food vouchers) and educational needs to medical expenses, transport needs and advocacy. Minute of Silence is about showing the link from the past to the present and how the RSL bridges that divide,” he said.

“When it comes to support I was fortunate enough to have great people around me, and I see our role now as picking up the pieces when there’s nowhere else to turn for those who aren’t so lucky.”

The Minute of Silence will employ mechanics that have never been attempted before in Australia. Supporters can phone 1902 25 04 14 and by dialling 0 after the opening message, they will hear the pre-recorded Minute of Silence.

Alternatively, supporters can text the word SILENCE and their home STATE to 1999 1234 where they will receive a return SMS with a link to their minute of silence which features the voice of WW2 Prisoner of War, Jack Bell and the pre-recorded minute of silence that they can listen to on their mobile phone.

Australians are also encouraged to visit www.minuteofsilence.com.au where they can find out more about the campaign and who it benefits.

As always, iconic ANZAC Badges will be sold across Australian communities by Appeals volunteers during April.

Editing Company: The Butchery & The Refinery