CB Exclusive: For this year’s Sydney Gay & Lesbian Mardi Gras sponsorship, ANZ and TBWA\Melbourne are empowering the Australian LGBTIQ+ community and its allies to challenge hurtful homophobic language by spreading a little #LoveSpeech.

In Australia, 74% of the LGBTIQ+ community believe that hurtful and homophobic language directed at them is a major issue, but only 34% feel confident in calling it out.

With 52% of non-LGBTIQ+ Australians believing the community get offended too easily, it’s no wonder the community feels disempowered to confront it.

As principal partner of Mardi Gras, ANZ has launched #LoveSpeech – a campaign born from the bank’s ongoing commitment to diversity and inclusion.

To ignite the conversation, a raw, emotive film has been released which calls attention to the profoundly negative effects hurtful language has on the the LGBTIQ+ community –underscoring that “Words Do Hurt”.

Directed by The Glue Society, the film portrays a collection of lesbian, gay, bisexual, transgender, intersex and queer individuals sharing their own lived experiences.

Hugely confronting in its unscripted honesty, the film concludes on a hopeful note – appealing for a world with more #LoveSpeech.

Surrounding the film, ANZ is revealing a prominent billboard overlooking the Mardi Gras parade-route which boldly espouses that “Boys Should Never Wear Dresses”, only to see LGBTIQ+ Graffiti artist, David Lee Prereira, disarm this hurtful slur by adding, “Without A Killer Pair of Heels”. The billboard is supported by a series of colourful posters and gifs that take frequently heard hurtful comments and flip them into #LoveSpeech. 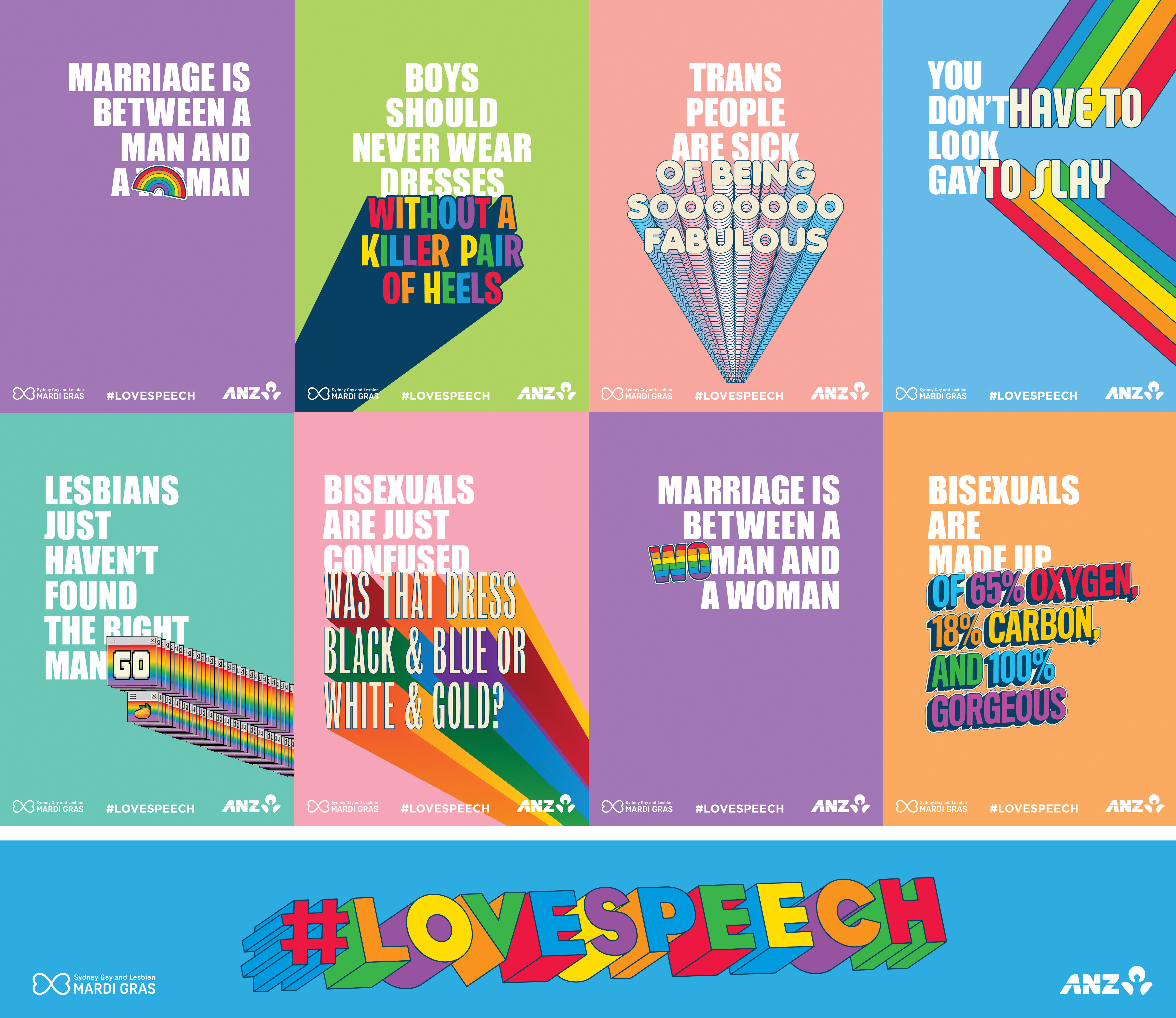 In addition, ANZ has created two useful tools in the quest for more #LoveSpeech. The “Hurt Blocker” is a Google Chrome Extention, which transforms hurtful slurs into fun-loving emoji’s. And ANZ’s Guide to #LoveSpeech helps people understand how words (even when unintentional) can hurt.

Says Sweta Mehra, chief marketing officer for ANZ: “We are incredibly proud of the work we have done over the years to demonstrate support for our LGBTIQ+ staff, customers and community. This year’s campaign is no different. With unkind, cruel and damaging comments directed at the community every single day, we think it’s time for more #LoveSpeech.”

Says TBWA\Melbourne: “As a long time sponsor of Mardi Gras, ANZ has a remarkable history of support for LGBTIQ+ inclusion. In a world where intentional hatred and casual homophobia can be shouted from the rooftops without any real consequence, #LoveSpeech draws a line in the sand for a more civilised, more respectful and less combative conversation.”

The campaign is further supported by a PR strategy which sees influencers Benjamin Law (social commentator and writer), Moana Hope (AFLW) and Georgie Stone (actress and trans advocate) lend their voices to the initiative.

Says Thrive PR: “As highlighted by the research, hurtful language is not only an issue that deeply affects the LGBTIQ+ community, but one that affects us as a nation. What is most startling is the discrepancy between what is perception and what is sadly, reality. We encourage everyone to get behind ANZ’s Love Speech campaign. Let’s spread a little more #LoveSpeech far and wide.”